These Portabello Mushroom Sliders were a contest entry. To honour Canada’s 150th birthday celebration, Mushrooms Canada held their annual Spotlight Appetizer Contest. And this year they asked for submissions with a Canadian theme. The winning entry was showcased this fall at the Food Bloggers of Canada conference in Ottawa. And the winner received a full conference pass. 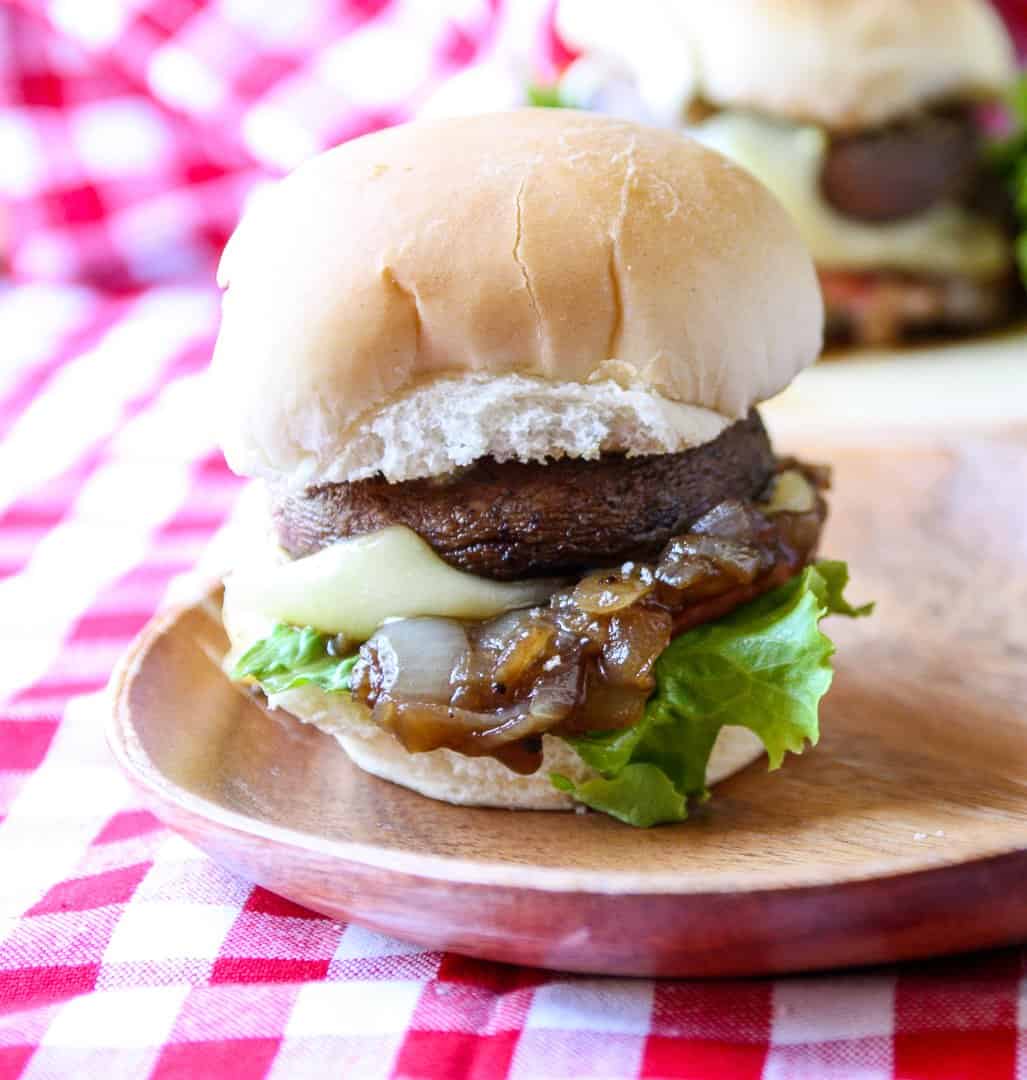 Unfortunately, I was not the winner. Nonetheless, I was pretty excited about what I came up with. These sliders, with mini portabellas, are piled with delicious maple caramelized onions. And then topped with Oka cheese and Canadian back bacon. These three ingredients make this little burger as Canadian as they come.

What Makes These Sliders So Canadian?

Of course, there’s Maple syrup. It’s the first thing, or one of them, that comes to mind when you think “Canadian.” Since Canada produces seventy percent of the world’s maple syrup, it makes sense. The maple caramelized onions are my favourite part of these portabella sliders. They are crazy delicious and a perfect complement to the mushroom, bacon, and cheese. Maple syrup accents the onion’s sweetness as they caramelize and the flavour is delicious.

Then there’s the back bacon. American friends may also know this as Canadian bacon. This bacon comes from the pork loin. It’s very lean and more similar to ham than bacon. Back bacon comes precooked and sliced in thin medallions. It’s a fixture on eggs Benedict and delicious on pizza. And on these sliders, too. 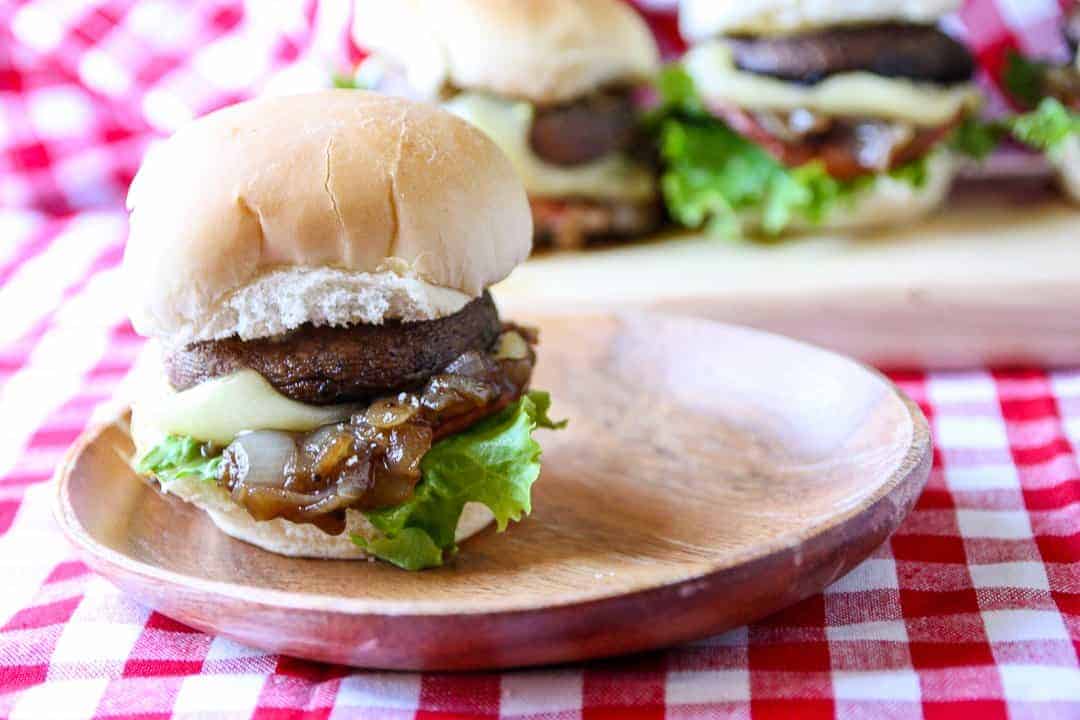 And Oka cheese. Oka is very much Canadian cheese. Monks in the 18th century in Quebec were the original oka cheesemakers. They still make Oka cheese in Quebec today, and it has a very interesting history. If you are interested in the story of the monks and Oka cheese making, this is a great article in an old Globe and Mail. It’s an absolutely delicious semi-soft cheese with a coppery orange rind, and a buttery, creamy, slightly nutty flavour. I couldn’t think of better cheese to use with portabella mushrooms. 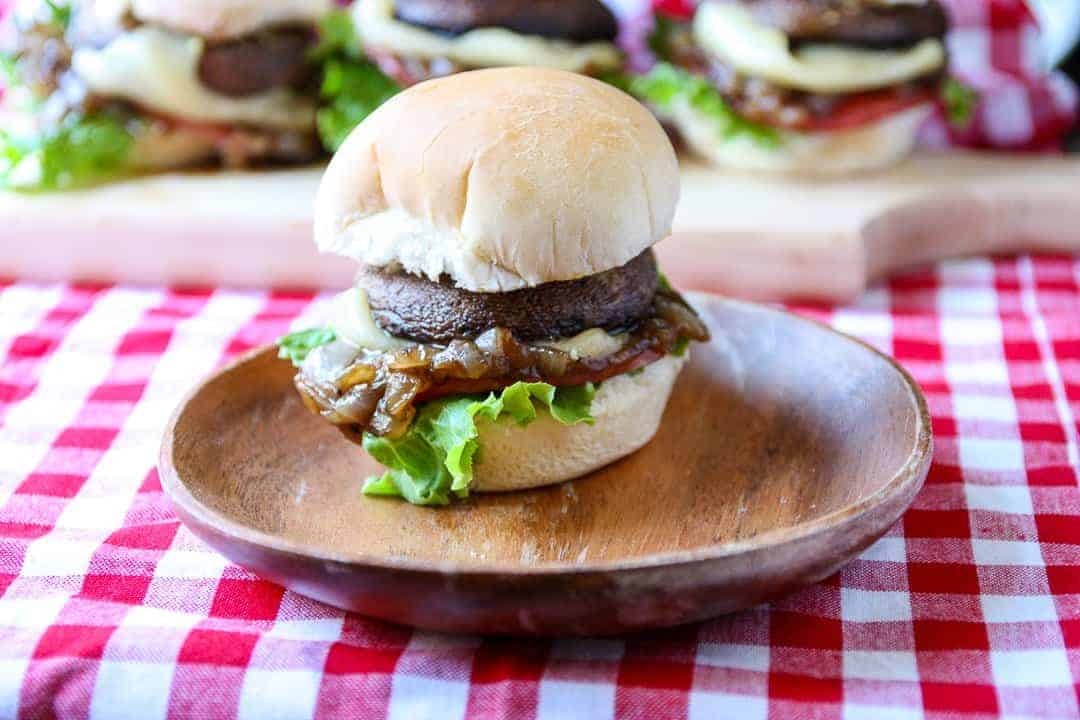 The mini portabello mushrooms are the perfect size for sliders, so, they are very quick to grill. The most time-consuming part of this recipe is caramelizing the onions. I like having a jar of these onions in the fridge. The recipe makes more than you’ll need for eight sliders but they are delicious for lots of other ones. You can use them on pizza, sandwiches, or tacos. Or top grilled meats or fish. They are also a nice addition to a charcuterie board.

Back bacon, being lean, has a chewy texture. The first time I made these sliders, we found that it made the slider a bit difficult to bite into. So when I made them again, I cut the bacon medallions into strips. Problem solved. 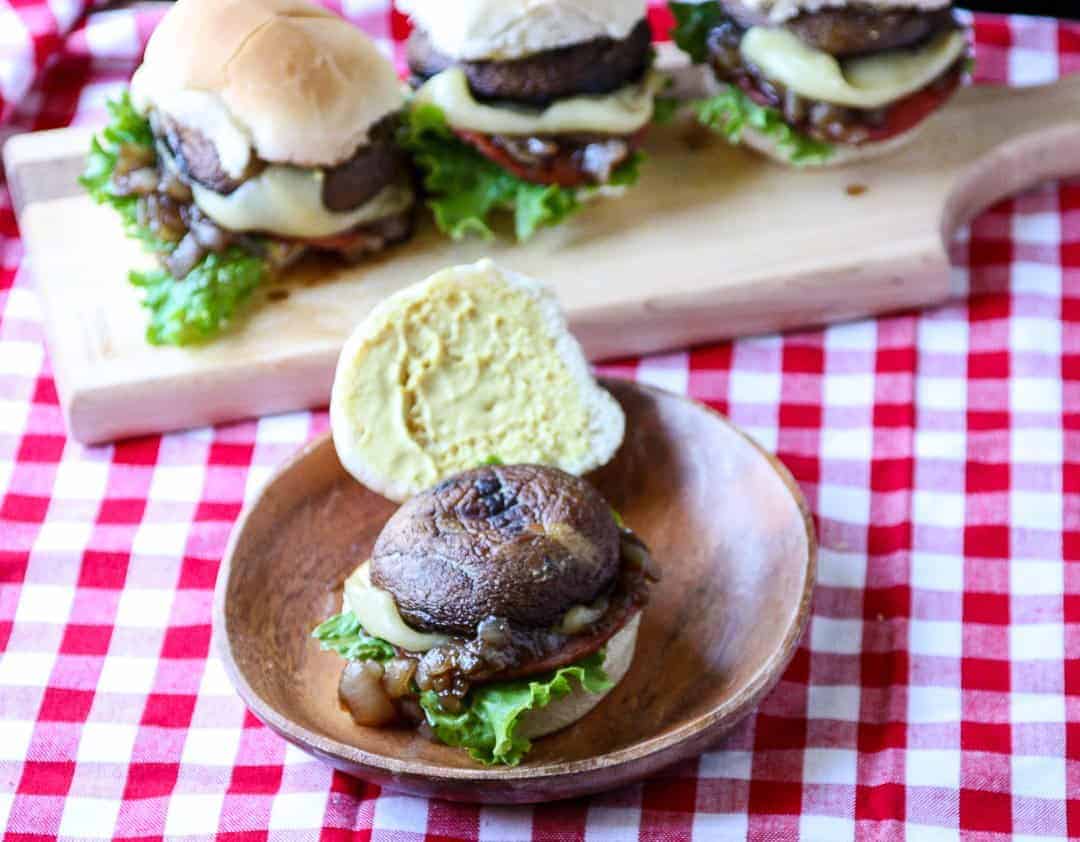 These are pretty Canadian, eh? Portobello mushroom sliders are a perfect appetizer for any kind of meal. They can also be a meal on their own (then everyone has more than one) if you serve them with fries or a salad. So, even though I didn’t win the contest, this recipe is still a winner in my books, and, I hope, yours too! 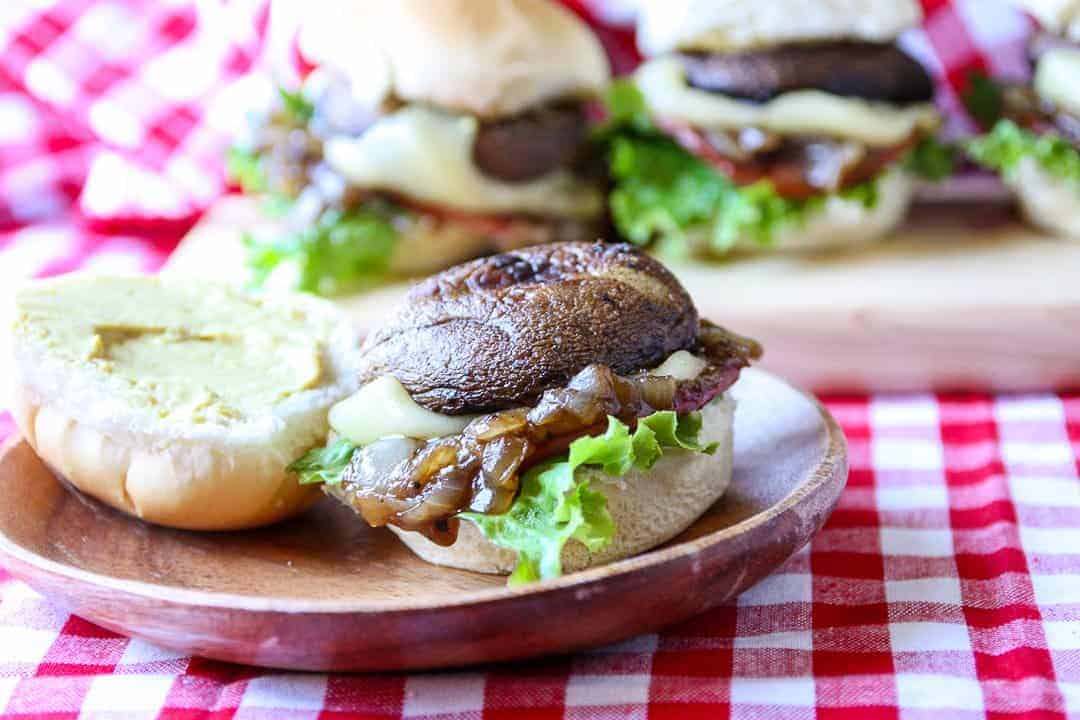 This recipe makes a one pint jar of Maple Caramelized Onions, and you will only use a portion of it for these sliders, so you'll have extra on hand to store in the fridge and use as a delicious condiment. Many of the steps in the recipe are simultaneous, so you can do a lot of the prep work while the onions are caramelizing and the mushrooms are grilling. 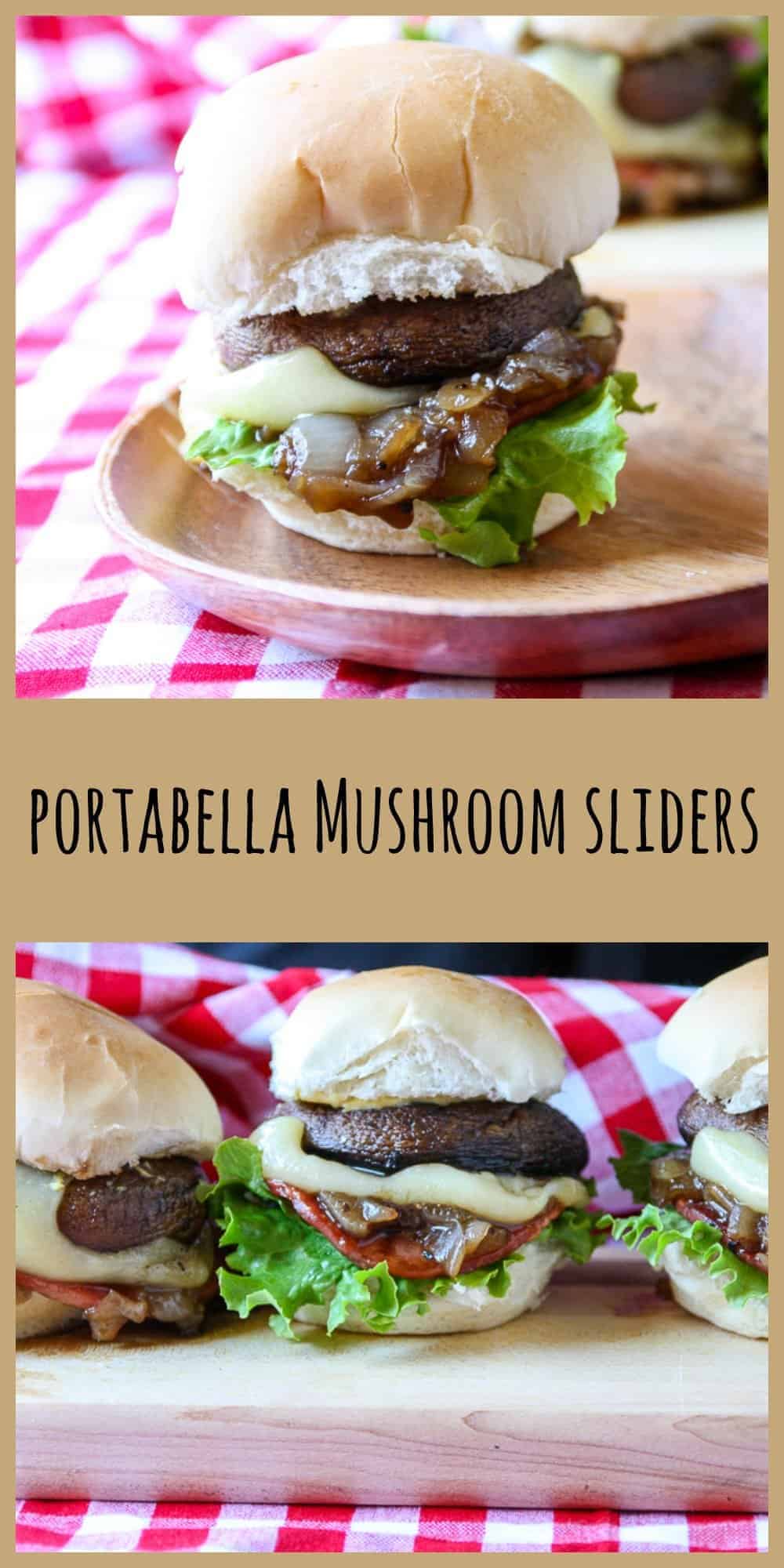