This Jamaican Pumpkin Soup makes me think of the Caribbean. When we visited Jamaica, we got to eat a delicious and authentic pumpkin soup. And the memory of it is prompted whenever it's pumpkin season here. That soup was velvety smooth, with the flavours of coconut, ginger, and nutmeg. There was a hint of both orange and lime  and it was just the right bite of spice. It was like tasting the tropics in a bowl. 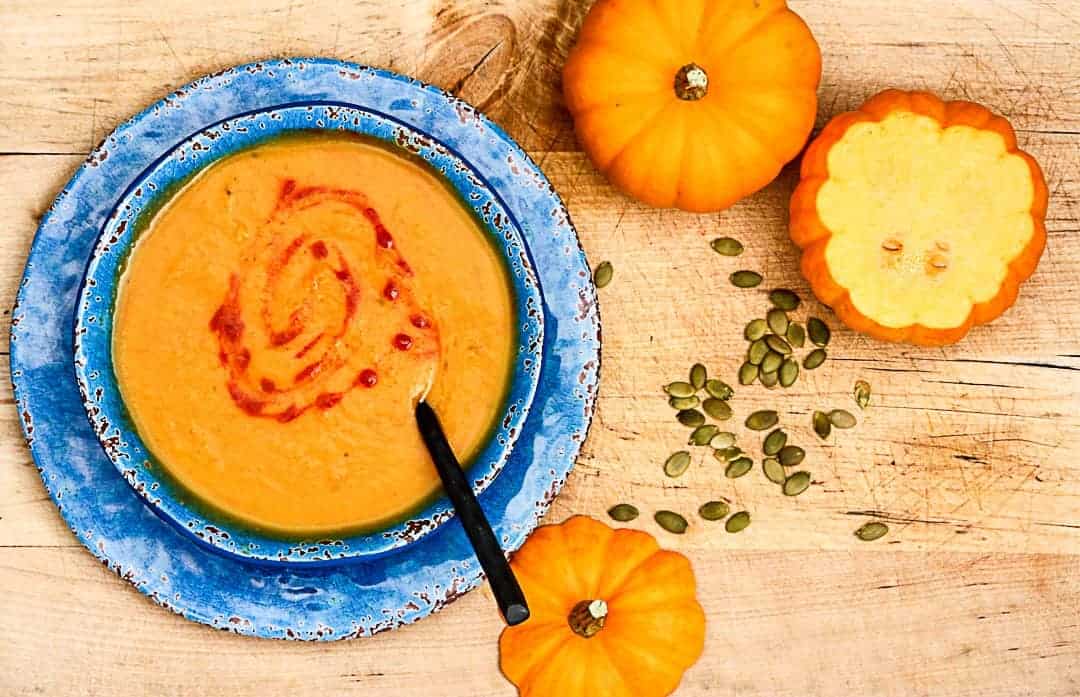 Pumpkins In The Caribbean

In the Caribbean, pumpkins are often called calabaza, or just winter squash. Calabaza, or tropical pumpkins, are a little different from our North American pumpkins, being green skinned instead of orange. The flesh of the calabaza is perfectly orange, though, and the taste is very similar to both pumpkin and butternut squash. Did you know that pumpkins and squash, melons, and cucumbers all originate from one single ancestral seed? Check out this fascinating read for more: The Evolutionary Event That Gave You Pumpkins and Squash 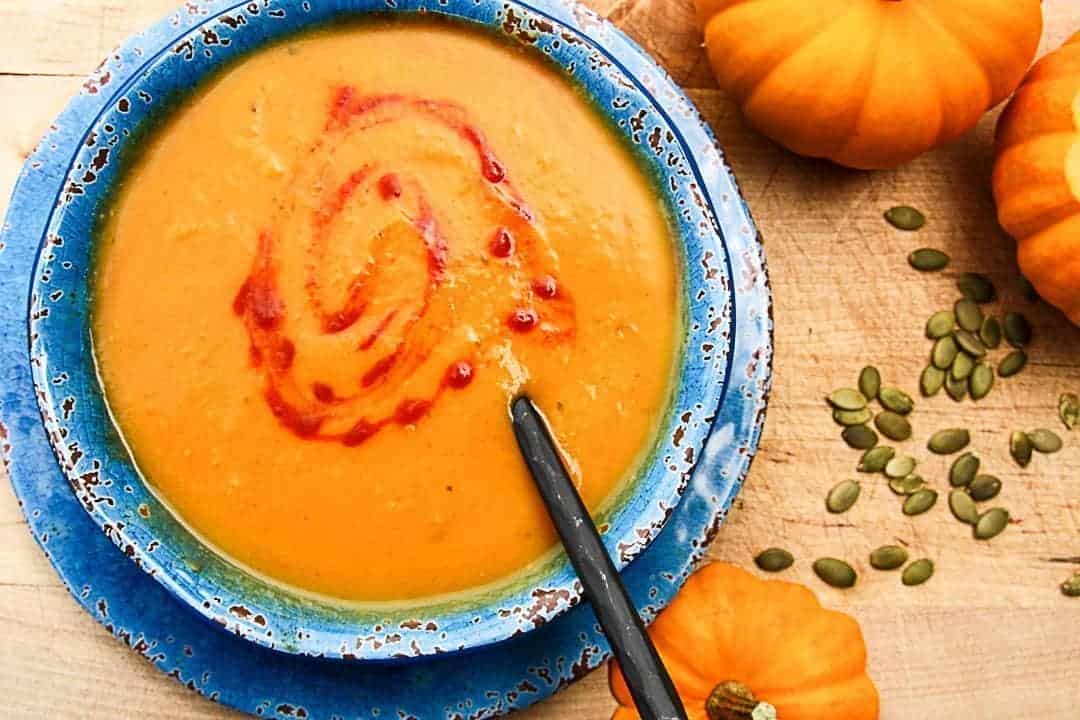 Choose Your Peppers, Hot, or Not

Since I'm always a fan of using what's available locally, I'm using the small pumpkin that I bought at the farmer's market which has been cheerfully decorating my kitchen island this week. Usually this soup is traditionally not pureed, instead it has chunks of vegetables in a broth. Often, a Jamaican pumpkin soup will have a Scotch Bonnet or Habanero pepper, which are extremely hot. I didn't want to overpower the pumpkin spice flavour of this soup, so I left out the chili pepper and used a hot sauce for garnish.

So obviously I'm taking a lot of liberties with the authenticity of this Jamaican Pumpkin Soup. It may not be authentic but it is so delicious, and makes great use of fresh pumpkin, one of the stars of the season. You may even hear the sounds of steel drums and feel the sea breezes when you taste this soup.

And if soup is your thing, here are a couple more ideas for you: Try another pumpkin soup recipe, Southwestern Pumpkin Soup or check out Red Lentil Soup  Vegetable Miso Soup; Chicken Vegetable Noodle Soup, or Salmon Chowder. 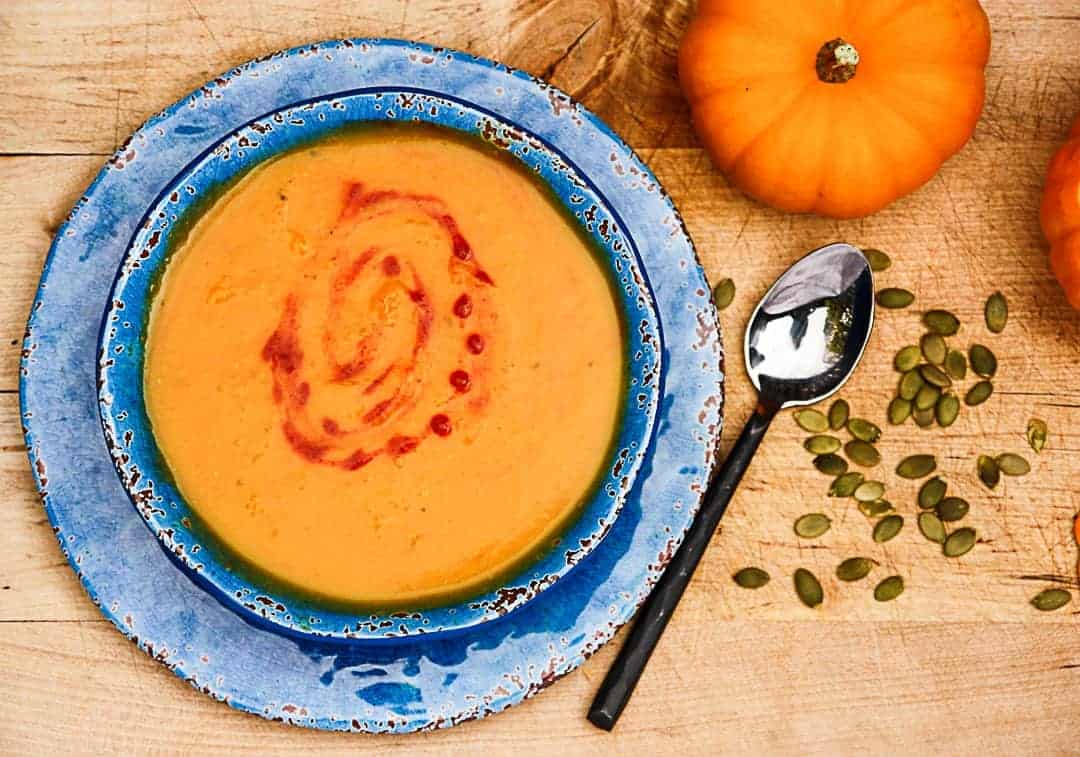 How to Make Jamaican Pumpkin Soup

When you prepare your pumpkin, save the seeds and toast them, for a heathy and delicious snack or salad topping. Pumpkin flesh can vary in color from pale yellow to deep orange. If your pumpkin isn't as brightly coloured as you would like, add a tablespoon or two of turmeric to get that nice orange hue. Any flavour it does impart is very complimentary and it will give just the right colour boost to your soup. 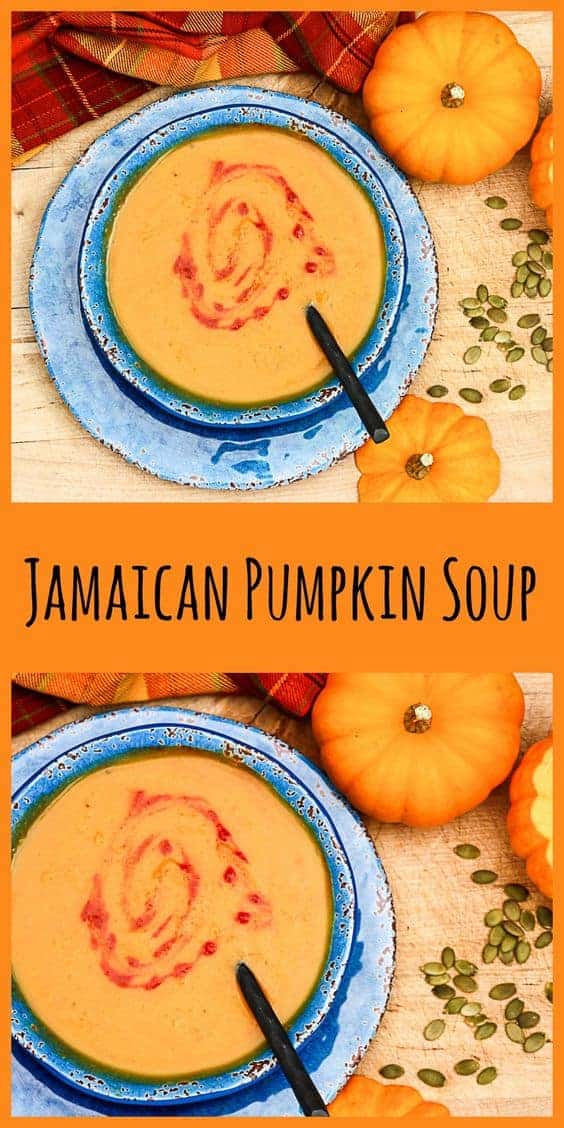