Beet Soup, also called Ukrainian borscht, is a simple, yet incredibly flavourful soup. Ready in less than an hour, this comforting beet soup is easy to make and the most satisfying, nutritious meal in a bowl. 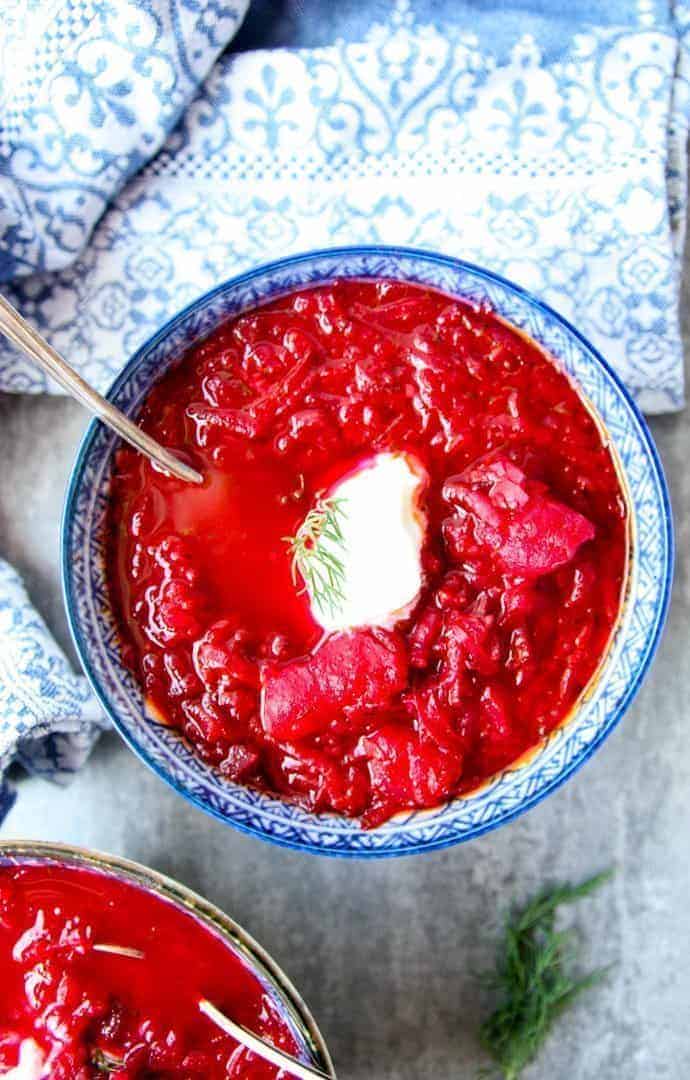 Besides being the most beautiful shade of ruby red and just generally pretty to look at, this quick and easy beet soup is hearty, delicious, and very nutritious. Also called Ukrainian borscht, this soup is filled with your favorite veggies, like cabbage, carrots, and diced potatoes. Plus, with just 15 minutes or prep time and less than 30 minutes to cook, this mouthwatering beet soup can be ready in under an hour -- perfect for a quick weeknight dinner. 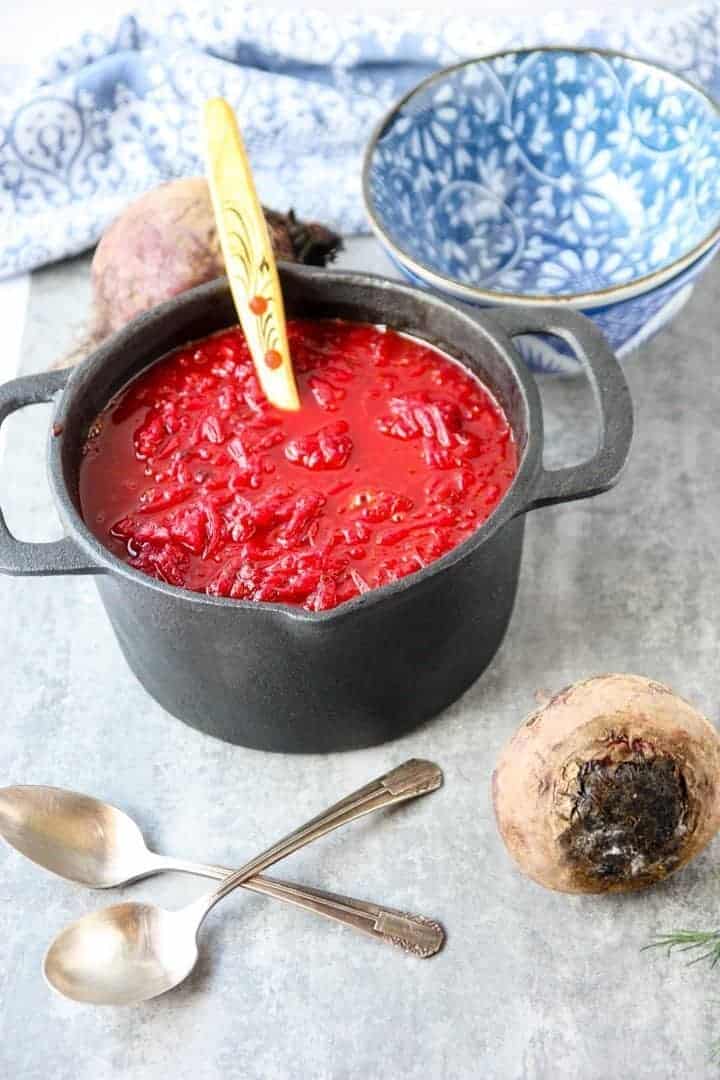 What is Ukrainian borscht?

Ukrainian borscht is a beet-based soup, usually cooked with cabbage and potatoes, and sometimes sausage or beef. But this soup always has beets, which is what gives it a beautiful ruby red colour.

The origins of this beet soup are in Eastern Europe, originating in Ukraine, but it is also commonly made in Russia, Poland, and Hungary, as well as the regions in North America that those populations settled when immigrating here. 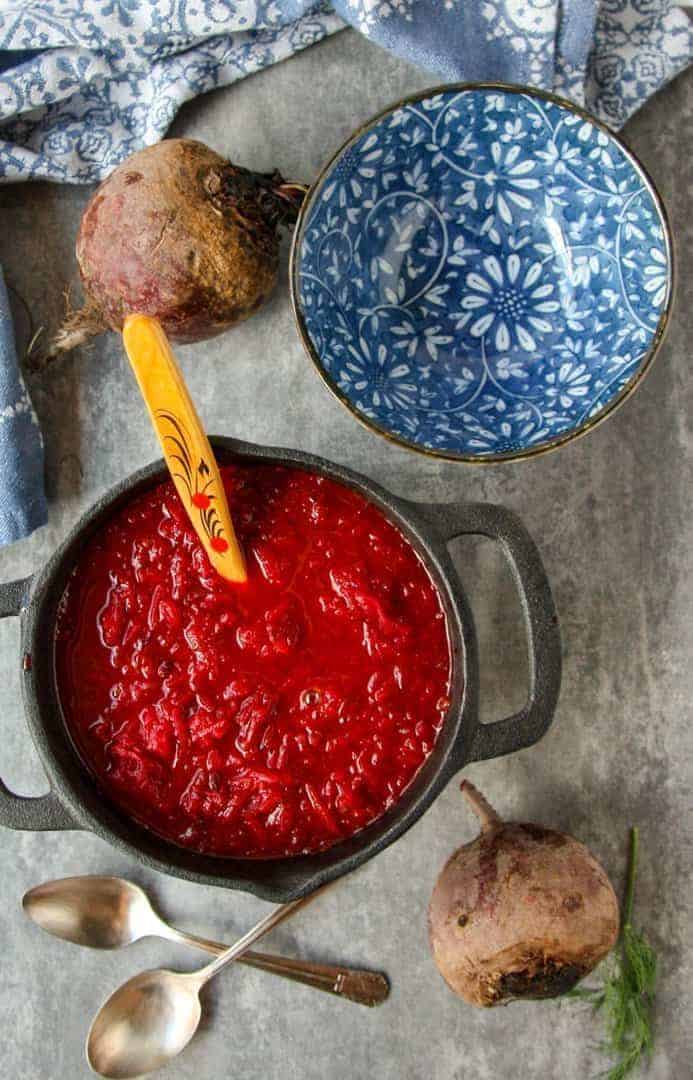 Here's What You Need to Make this Beet Soup 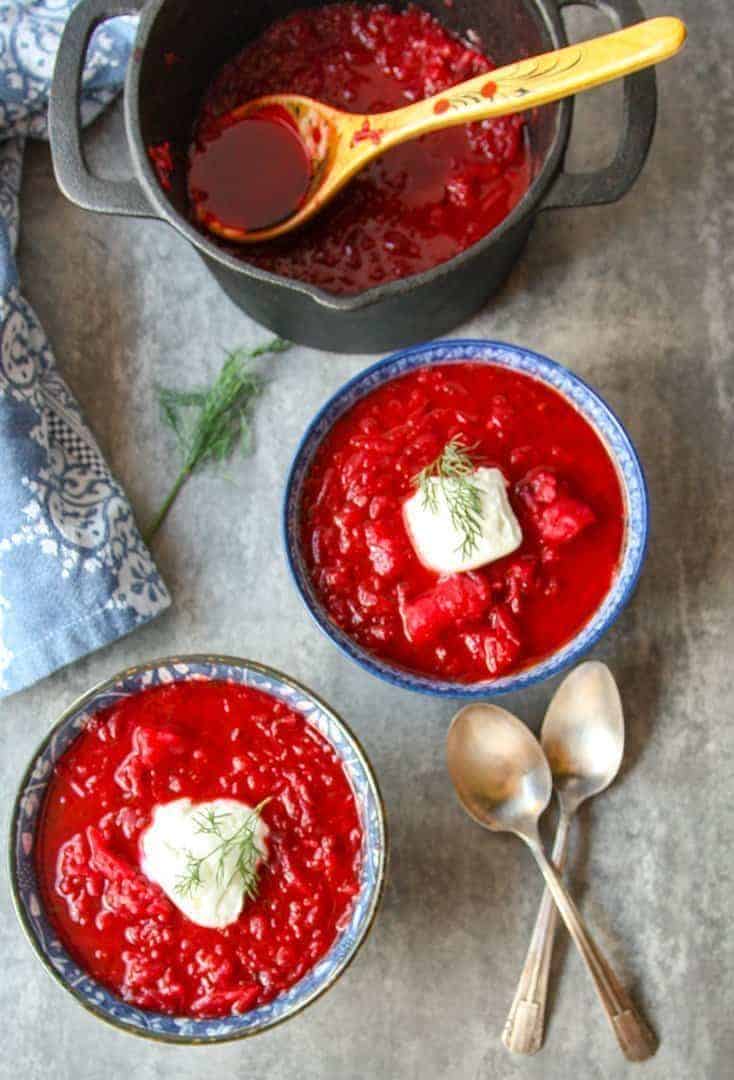 How to Make This Recipe, Step By Step

First, heat oil in a large pot over medium heat, then when oil is hot, add onions and garlic. You will want to continue to sauté until the onions are softened and translucent, which usually takes about 5 minutes.

Next, you will want to pour in vegetable stock for your beet soup and bring the soup to a boil. When the broth is boiling, add beets, cabbage, and carrots. Bring the soup back to a boil, then reduce heat to a simmer.

Cover and allow the soup to simmer for about 15 minutes or until all veggies are tender.

Now it is time to add potatoes! Cover and simmer an additional 15 minutes or until the potatoes are tender.

Remove your beet soup from the heat and stir in lemon juice, dill, and season to taste with salt and pepper. Serve your delicious soup with sour cream or Greek yogurt for garnish, along with more fresh dill. 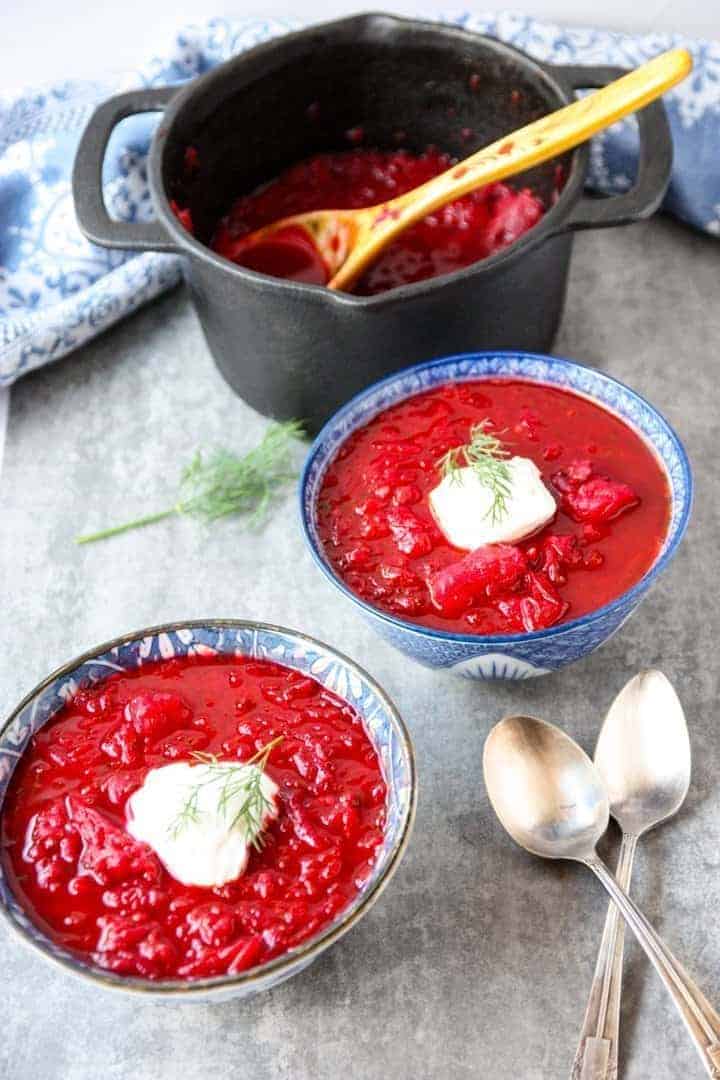 The Many Variations of Beet Soup

There are many, many variations of Ukrainian borscht recipes, differing based on the countries that they come from, to the cooks that make them, to the ingredients that are plentiful in that region. The recipes have also been passed down through generations -- in fact, for me, this recipe is a very different version of the borscht that I grew up with.

I grew up in the Kootenay region of British Columbia, where there is a very large Doukhobor community. Until I ventured out into the culinary world, the Doukhobor version of borscht was the only one that I knew. I promise to post that recipe soon, because it is delicious in its own right, and still my favourite. 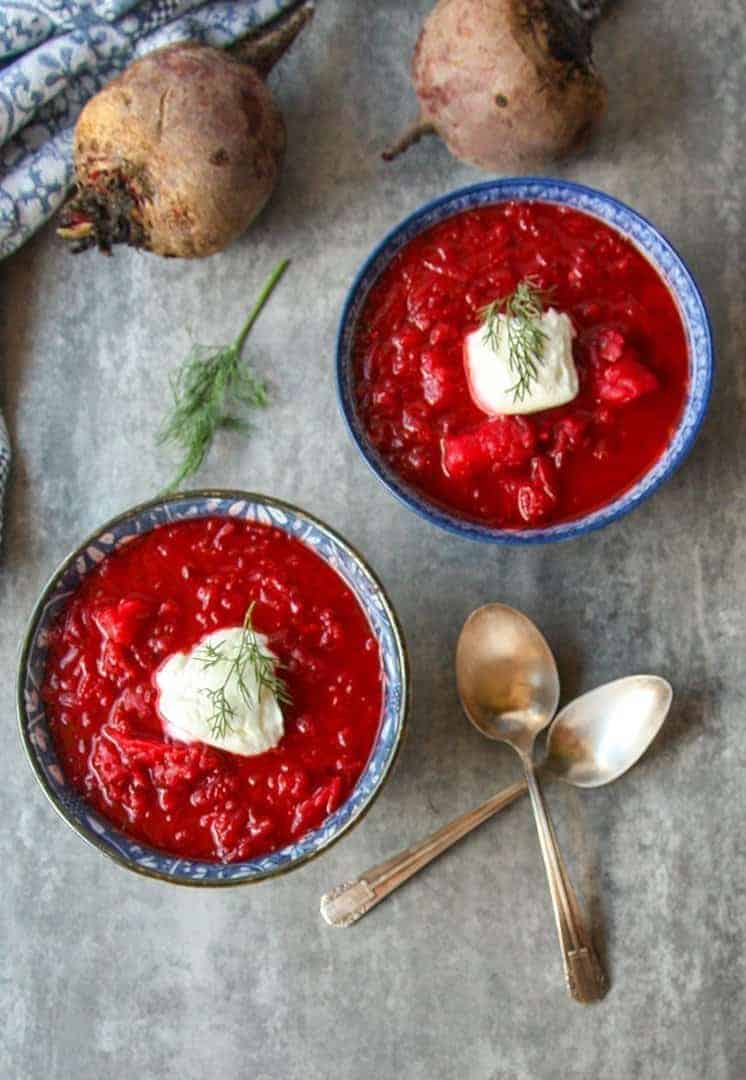 For me, Ukrainian borscht is always meatless; however, there are many beet soup and borscht recipes using beef ribs, ground beef, and sausage. This vegetarian version is closer to what I am used to, and it tastes amazing without any meat.

Is beet soup tart or sweet?

This easy soup recipe has so much sweetness from the beets, which is wonderful -- but to balance that sweetness, it’s important to introduce a few tart notes to the soup. I use lemon juice in this recipe, but you can also use apple cider vinegar.

Beets are low in calories, but very high in vitamins and minerals, as well as antioxidants and fibre. You can learn more about just how nutritious these root veggies really are for us here: Nutrition Benefits of Beets.

Why do you need a food processor to make soup?

A food processor makes short work of this soup, reducing the chopping, & long cooking time of beets. If you don't have one, chop your veggies as small as possible. 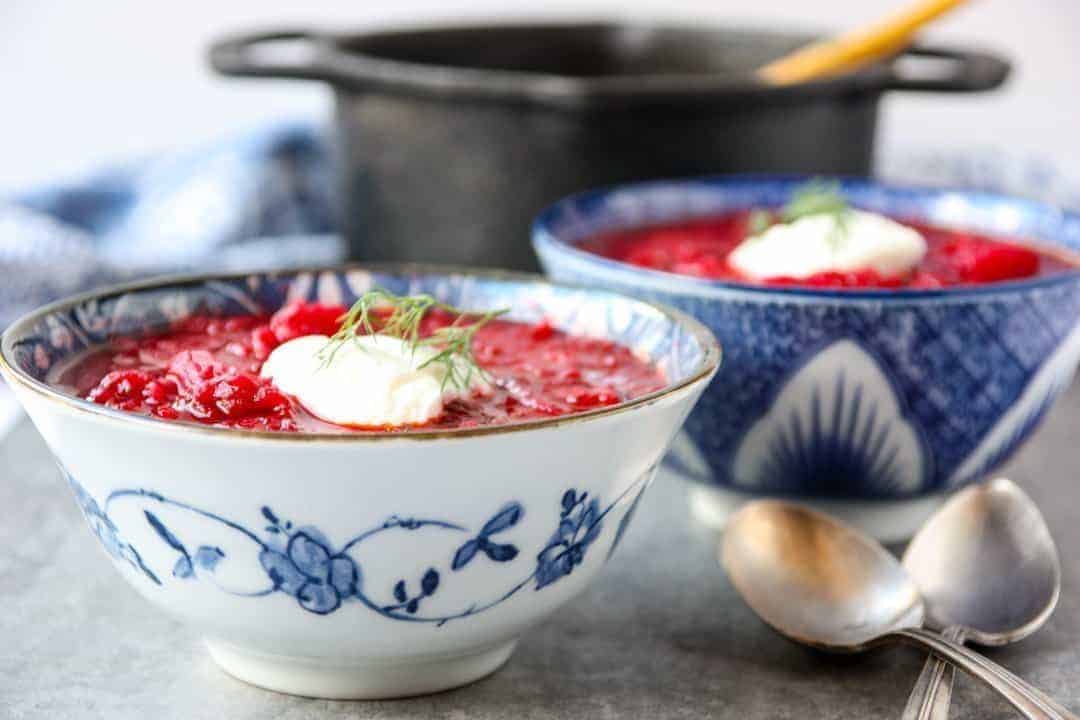 Do you love beets as much as I do? Check out these recipes too: 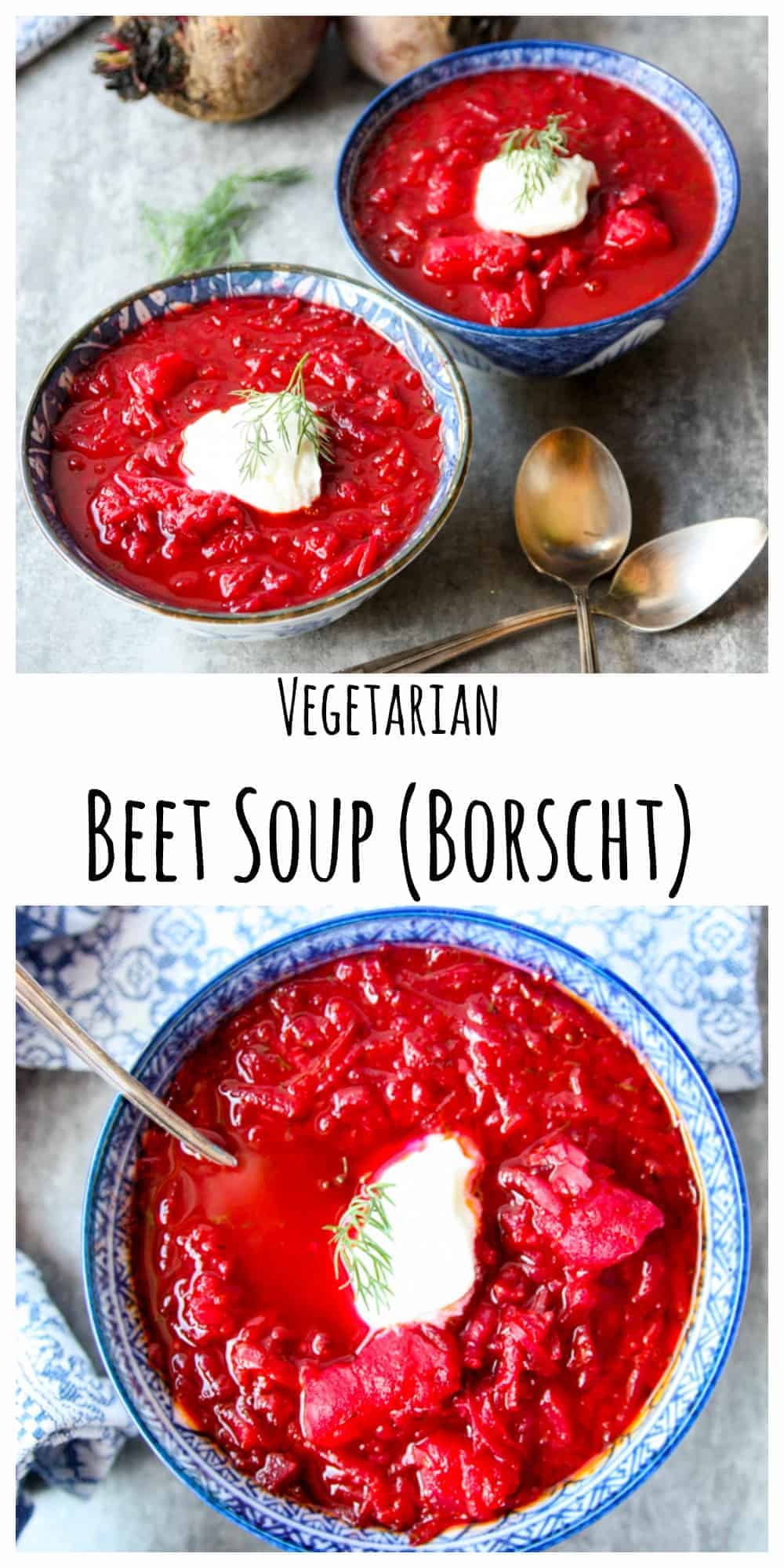