Muhammara is my new favourite dip. I’m in love with this spicy, sweet, smoky dip, and I know that if you make this muhammara recipe, you will be too. 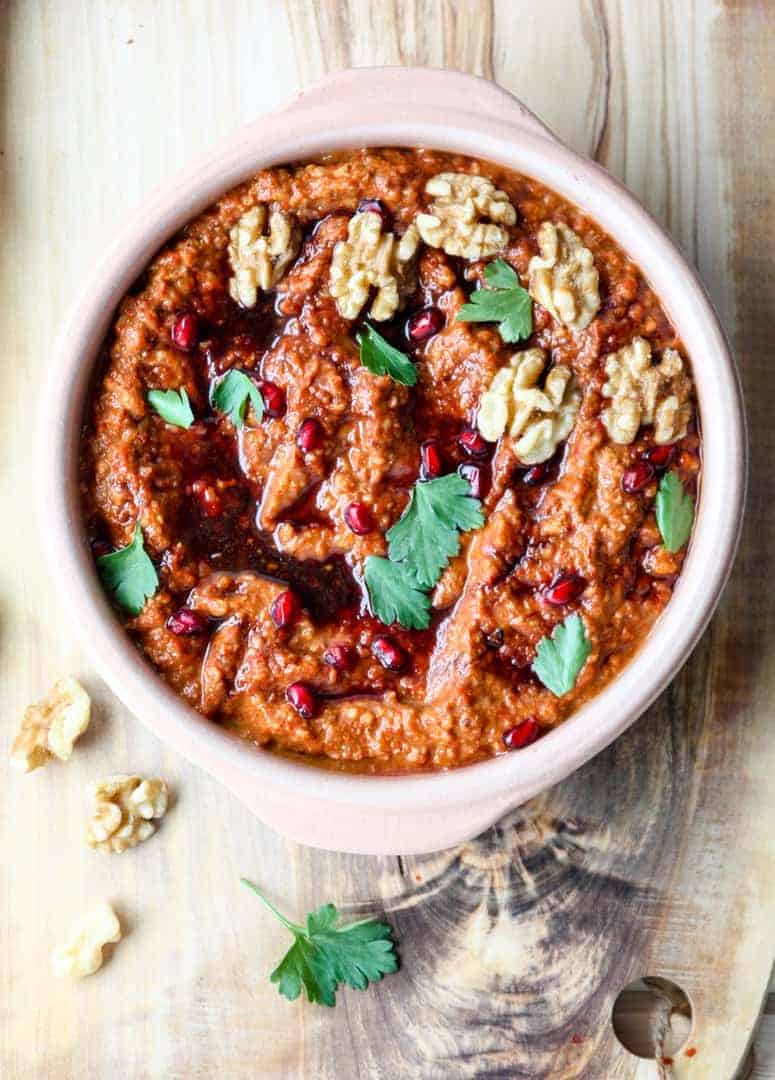 Muhammara is a beautiful combination of spicy, nutty, sweet, tart, and smoky. 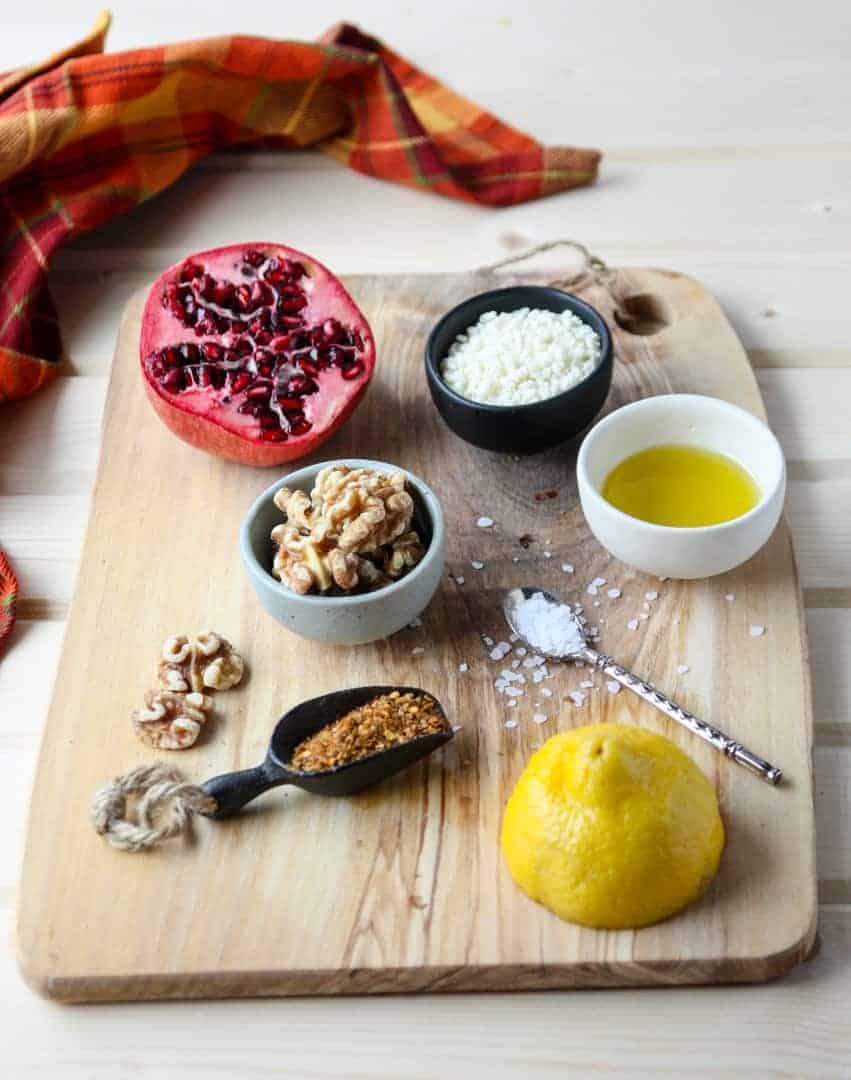 How Do You Pronounce Muhammara, Anyway?

Muhammara isn’t hard to pronounce, once you have heard and said it a couple of times. Basically, it’s MOO-Hammer_ah. Hear it for yourself on howtopronounce.com , then practice saying the word while making this muhammara recipe, and you’ll have it down pat. 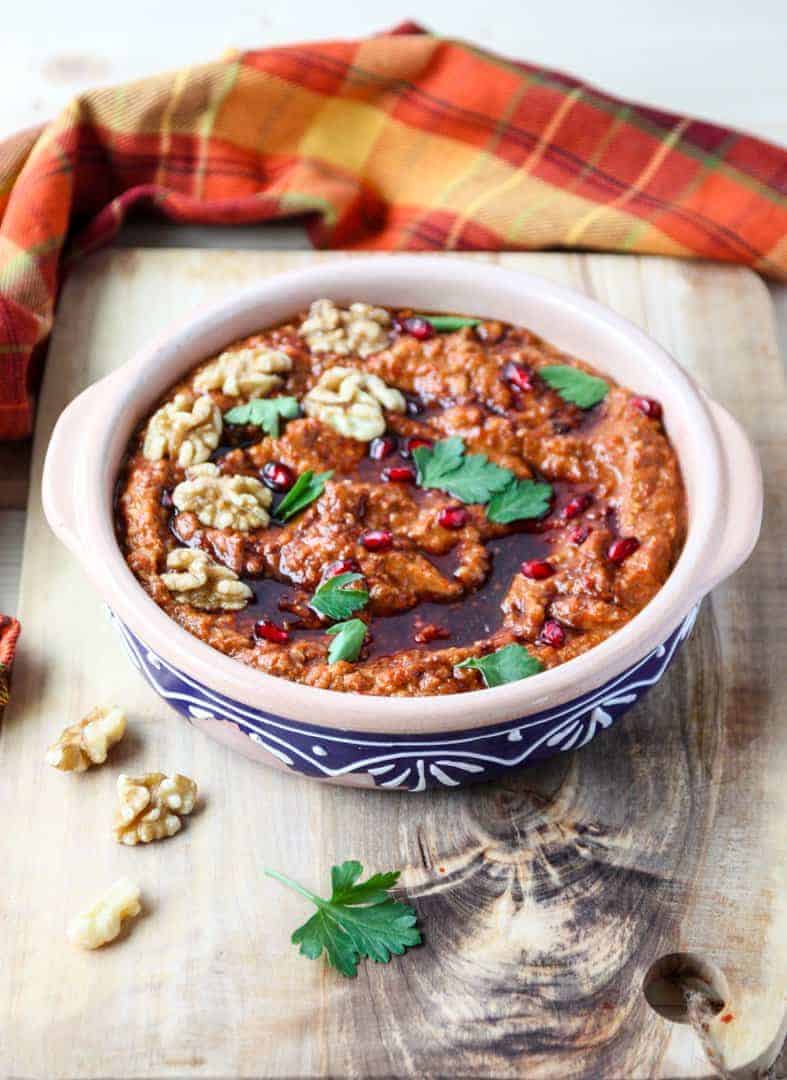 What is Pomegranate Molasses?

Pomegranate molasses is a key ingredient in this muhammara recipe. It is simply pomegranate juice, simmered until it’s reduced and thickened. It can be difficult to find it in the store, depending on where you live. If your grocery store has international selections, that would be where to look. Otherwise, try a Middle East grocery, or on-line.

However, there is really no need to buy pomegranate molasses, because it is seriously easy to make. Simply bring pomegranate juice (either freshly squeezed or store-bought) to a boil in a saucepan, then reduce the heat and simmer until it’s reduced by half. Remove from the heat and allow it to cool. So simple. 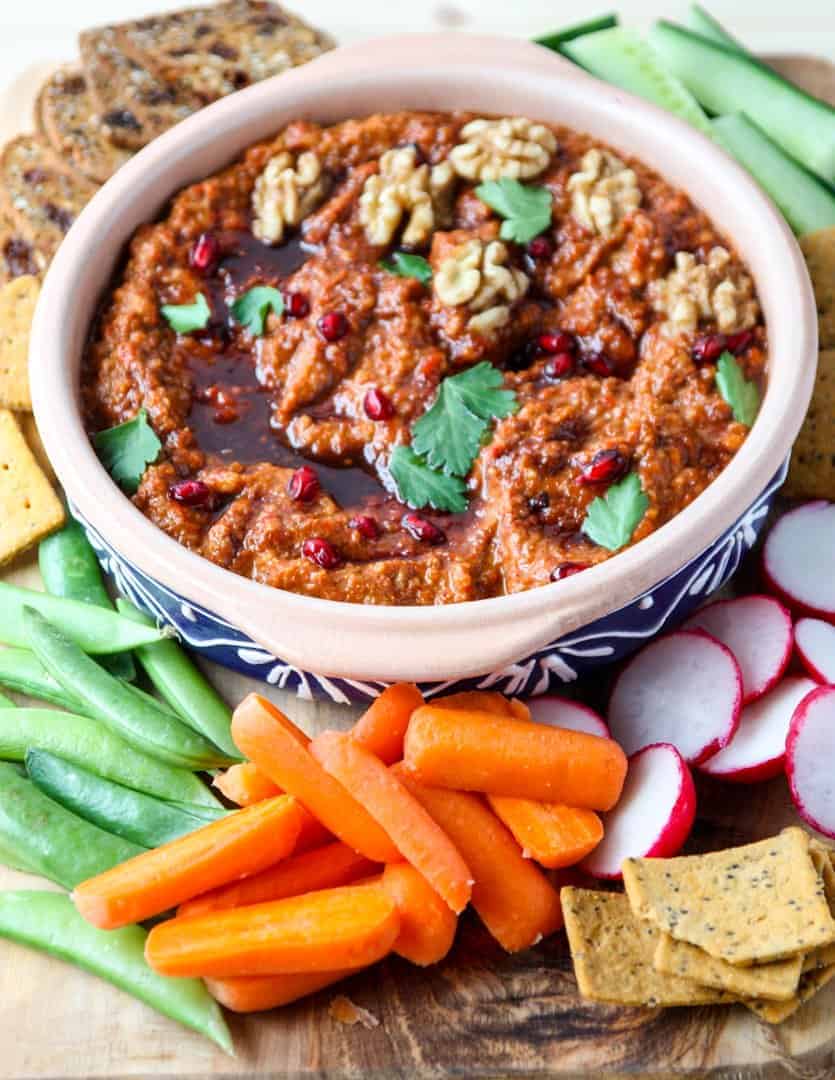 How to Roast Peppers

The best way to roast peppers is in a very hot oven until they are soft and their skins are charred and blistered. You can also roast them over a hot flame on the stove-top, but they may not get soft enough before they are charred. And, if they do, they will release juices which can make a mess.

The oven method is simple and leaves your hands free to prep the rest of the recipe.

Once your peppers are tender and charred, either cover them with foil or put them in a bowl with a lid for 10 minutes to steam. This makes it very easy to slip the skins right off of the peppers. 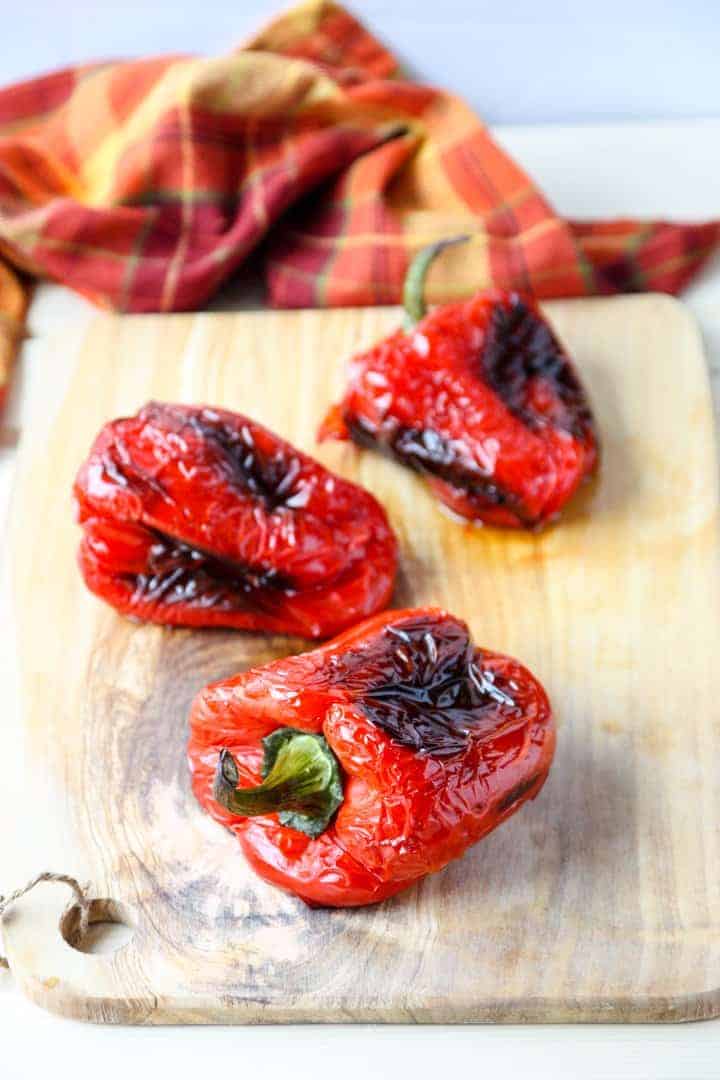 How Spicy is this Muhammara Recipe?

Muhammara has at least a hint of spice, but you can make it as spicy as you like, or not. Typically, this dip is flavoured with an Aleppo spice blend, which has a moderate heat level. Aleppo peppers have slow-building heat, so it’s best to start off with a little, taste, and wait a little while.

Like pomegranate molasses, you can find Aleppo spice blends on-line or at a Middle Eastern grocery store. You can also substitute harissa spice blend or Korean gochugaro spice blends. Or, if even those are hard to find, use equal parts Hungarian sweet paprika and red chili pepper flakes. (You may need to add extra salt if you go this route). 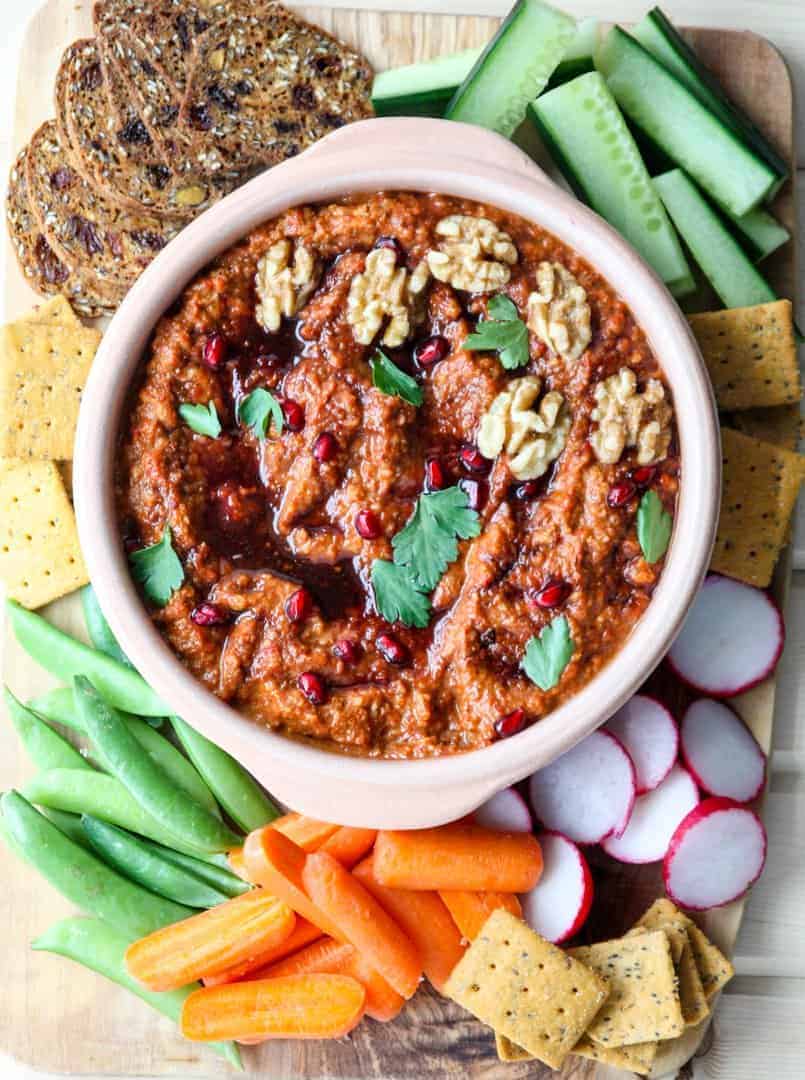 How To Eat Muhammara

This muhammara recipe is a wonderful dip for vegetables, crackers, or pita bread. You can also use it as a spread for tacos, burgers, wraps, and sandwiches. It’s wonderful in place of tzatziki for these Keftedes Pita Sandwiches.  Use it in place of pizza sauce, and as a topping for grilled meats and chicken. Stir it into soups, or use it on a rice bowl. 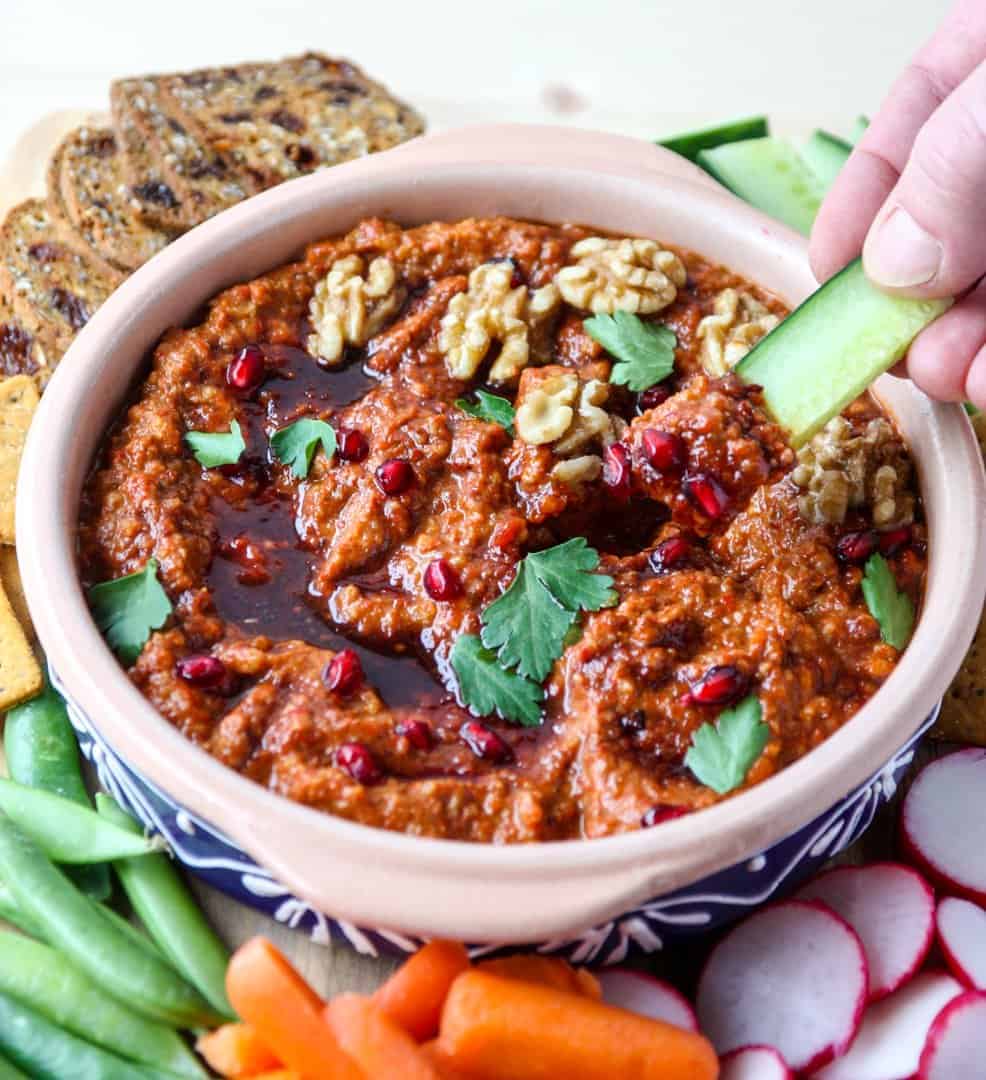 How Long Does This Muhammara Recipe Keep?

You can store muhammara in an airtight container in the fridge for up to a week. It’s best to serve this dip at room temperature or just slightly chilled, so bring it out of the fridge for 15-20 minutes before using it.

Can I Freeze Muhammara?

Yes, you can freeze muhammara. Just put it into an airtight freezer container and freeze in the portions that you like for up to a month. You can defrost it overnight in the fridge. 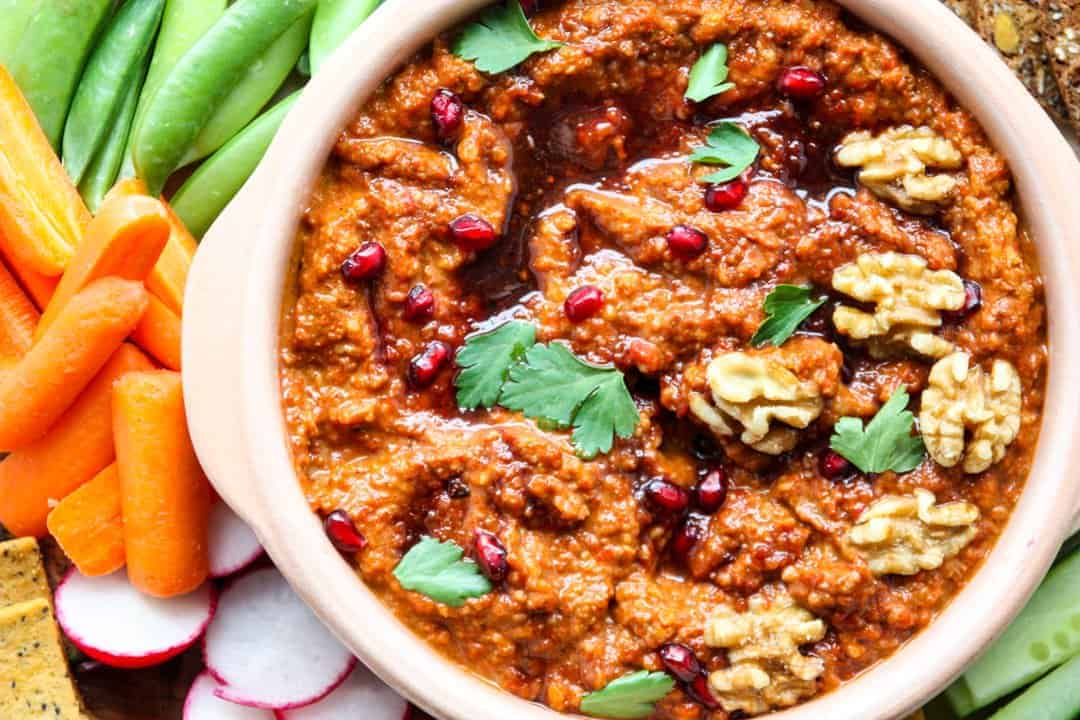 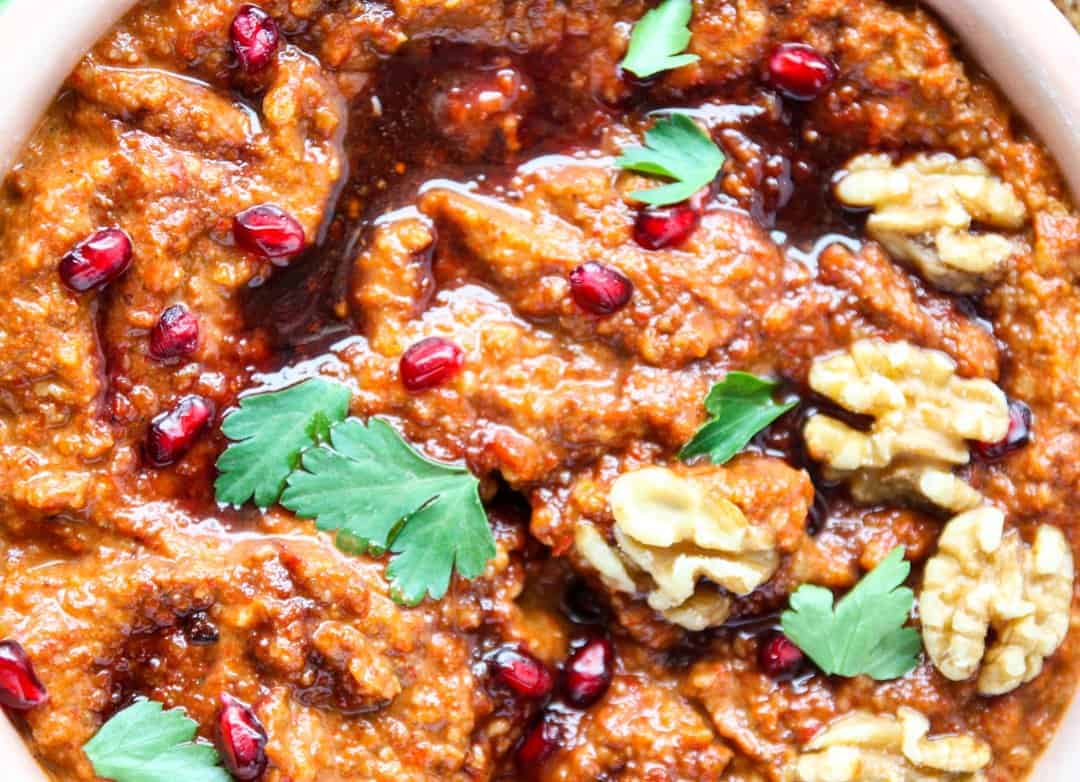 If your walnuts are not toasted, use the heat from the oven after roasting the peppers. Spread the walnuts on the baking sheet you used for the peppers and put them in the still-hot oven for about 5 minutes. Remove and allow to cool before using them. In case you missed it in the body of the post, you can make pomegranate molasses by boiling pomegranate juice, then simmering until it is reduced by half and thickened. Remove from heat and allow it to cool before using it. Optional garnishes for muhammara are pomegranate seeds, walnuts, fresh parsley, mint, or sliced scallions. If you use gluten-free breadcrumbs, this recipe is gluten-free and every bit as good. 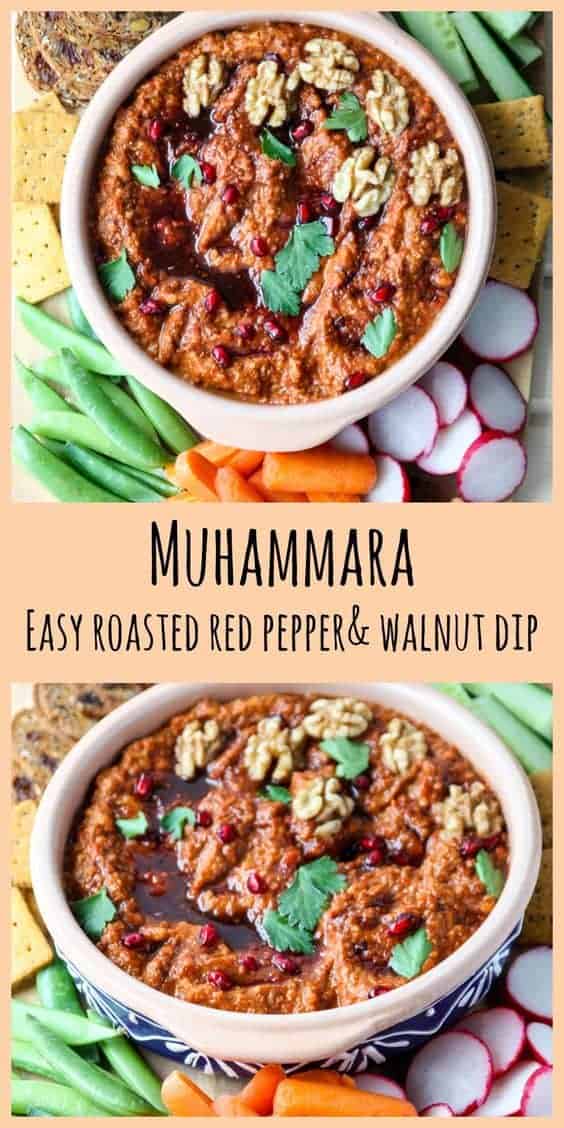