Spanish Stuffed Peppers are easy, healthy, and best of all, delicious. They're stuffed with a delicious beef and farro filling, packed with the smoky flavours of Spain and drizzled with a fresh parsley salsa verde. These peppers are perfect when you want some lively spice, without too much heat. 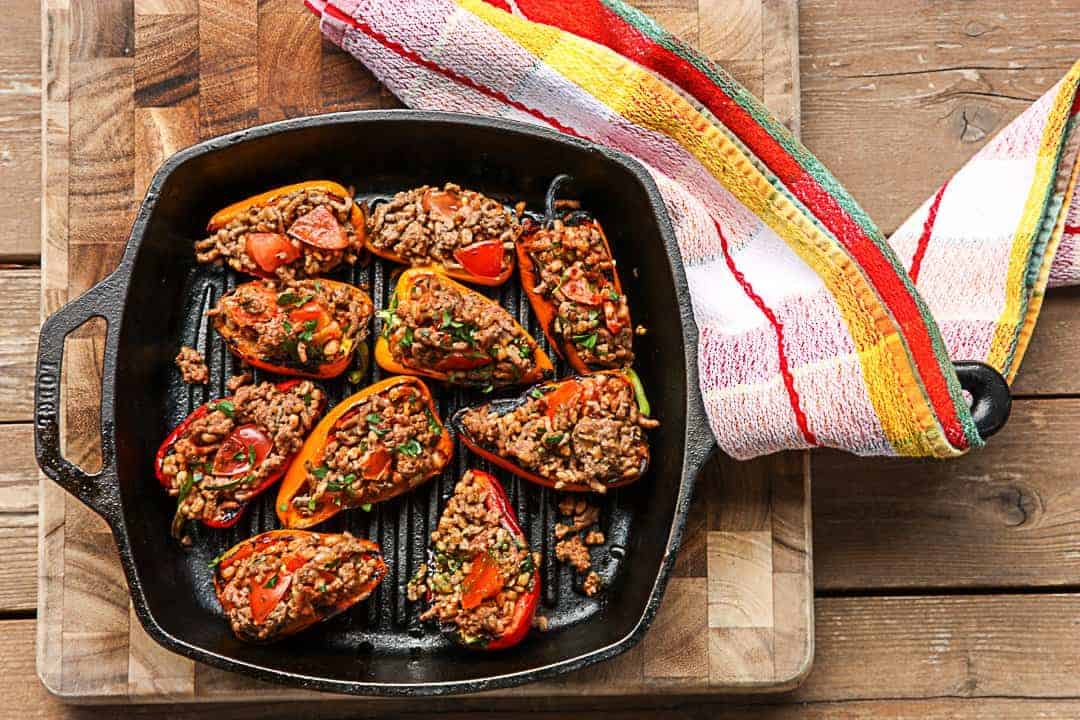 Stuffed Peppers have always been a favourite of ours. Especially this time of year when there are peppers in the garden. I've been picking the peppers a little small, so today when I had a bunch of them, I knew I wanted to stuff those little babies. They are at various stages of yellow, orange and red. I like to leave the peppers on the vine until they are at least yellow. But even better, orange and then red. 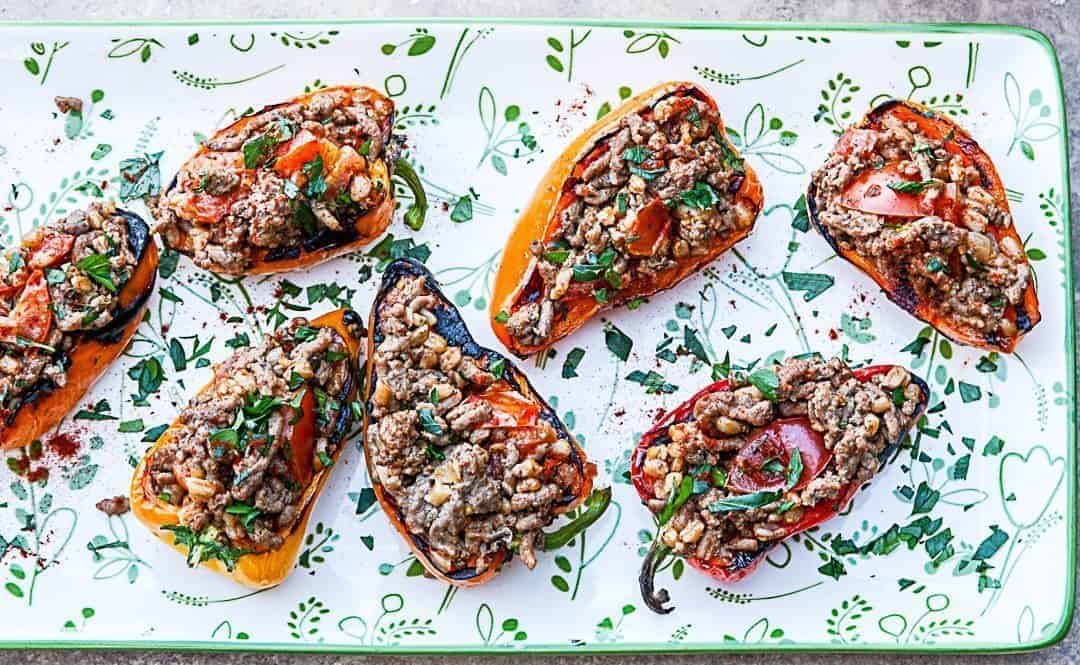 I have fallen in love with farro, a delicious ancient grain that has a chewy, nutty taste. Farro is also known as emmer, and it is a common ingredient in Mediterranean &  Middle Eastern dishes. It's a very healthy grain, high in fibre, protein, & nutrients, especially iron   Farro can stand in for rice, barley, bugler or any other grain in a recipe. And since I had some farro already cooked for a salad, (this delicious Farro, Pomegranate, & Belgium Endive Salad), I used it in place of rice for these stuffed peppers. The cooking time for farro depends on a lot of factors, so follow the directions on your package, or check out Never Over (or Under) Cook Farro Again. 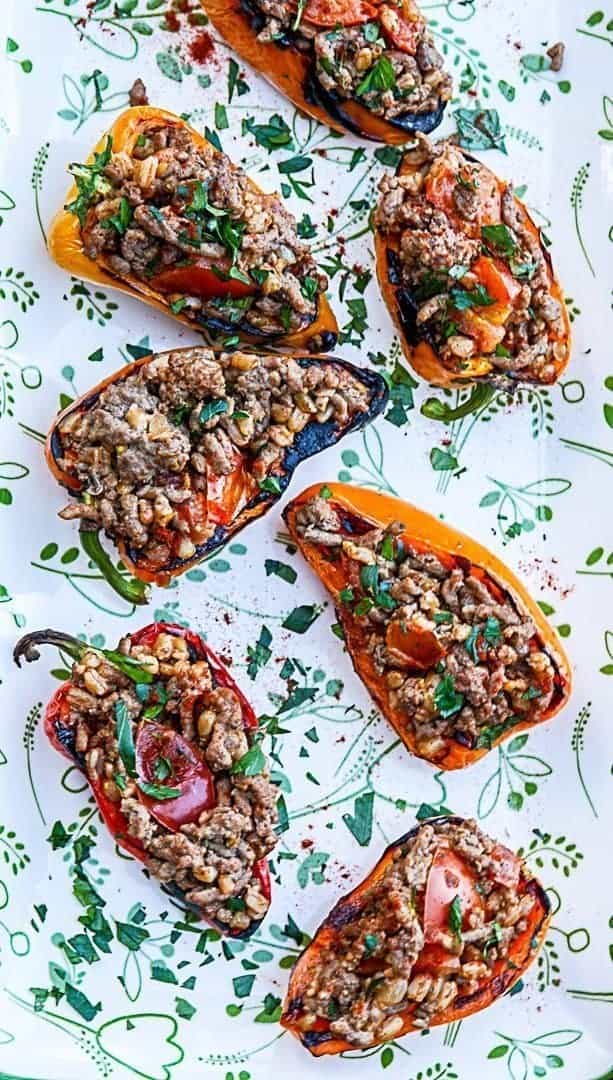 Spanish cooking is all about simple spices and paprika, or pimentón is frequently the star. Smoky Spanish paprika is different from Hungarian paprika. But if you can't find the Spanish variety, you can substitute spicy Hungarian paprika.

Parsley is also an extensive ingredient in Spanish dishes. So these stuffed peppers are accompanied by a simple and fresh salsa verde of parsley, garlic and olive oil. This dish is easy to make, and the nutty chewiness of the farro, with smoky paprika, sweet peppers and the bright freshness of parsley came together beautifully. A simple salad of fresh tomato and cucumber on the side made a delicious dinner.

These Spanish stuffed peppers can easily be a vegetarian option. Just omit the ground beef, increase the farro, and add more tomatoes. 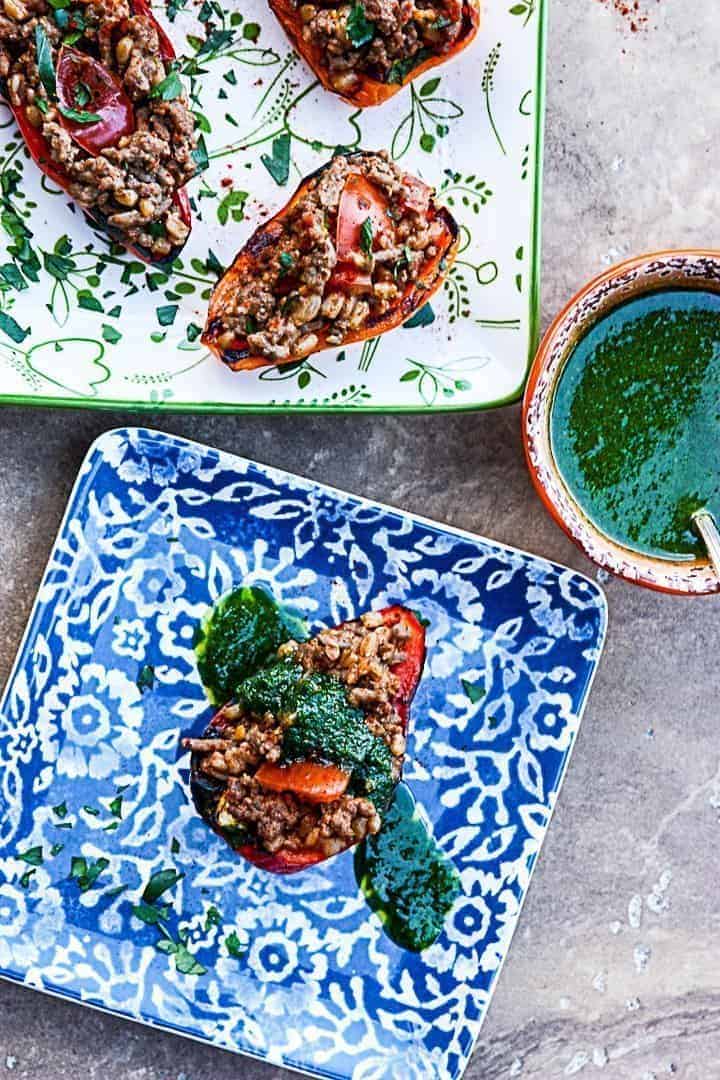 To use the oven instead of a grill, preheat oven to 400° and follow the same steps. You can substitute any grain for the farro, including rice or quinoa. For a gluten-free version, use buckwheat groats or millet. You can substitute mushrooms or tofu for the ground beef for a vegan version.