I had to share these Blueberry Coconut Waffles with you because they were so good. These delicious, gluten-free waffles are also crisp on the outside, and light and fluffy on the inside. Waffle perfection. 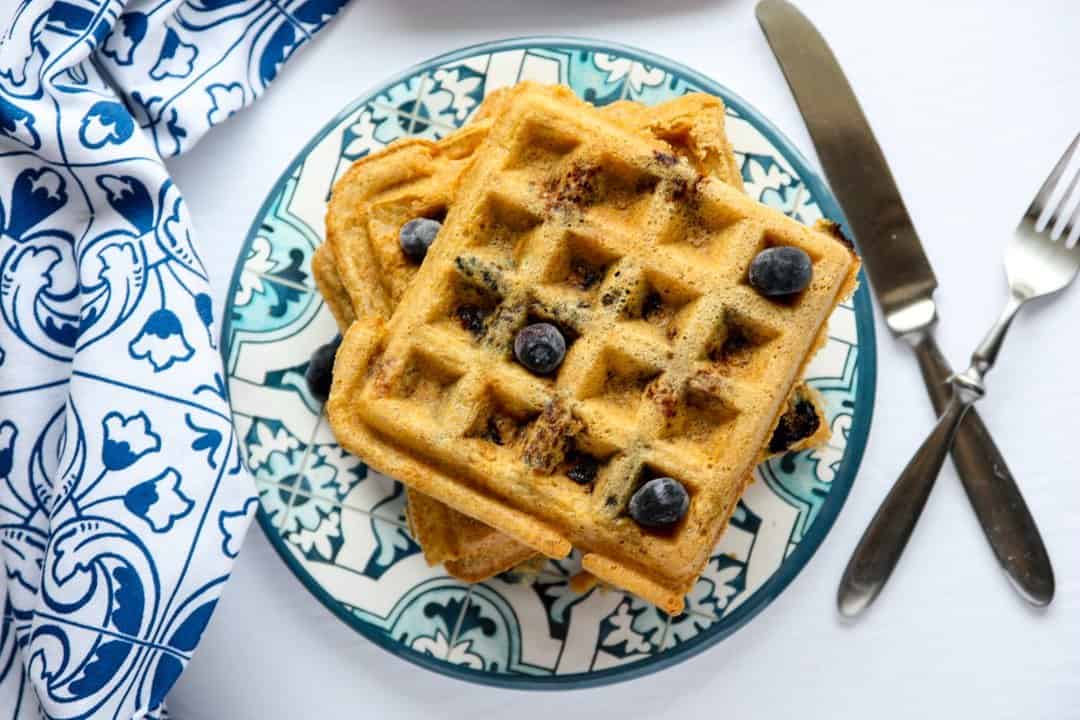 Coconut and blueberries are always a great combo, especially when you add a splash of maple syrup. I used coconut oil in place of butter and stirred in some shredded coconut, which gave these waffles extra flavour and crispness. 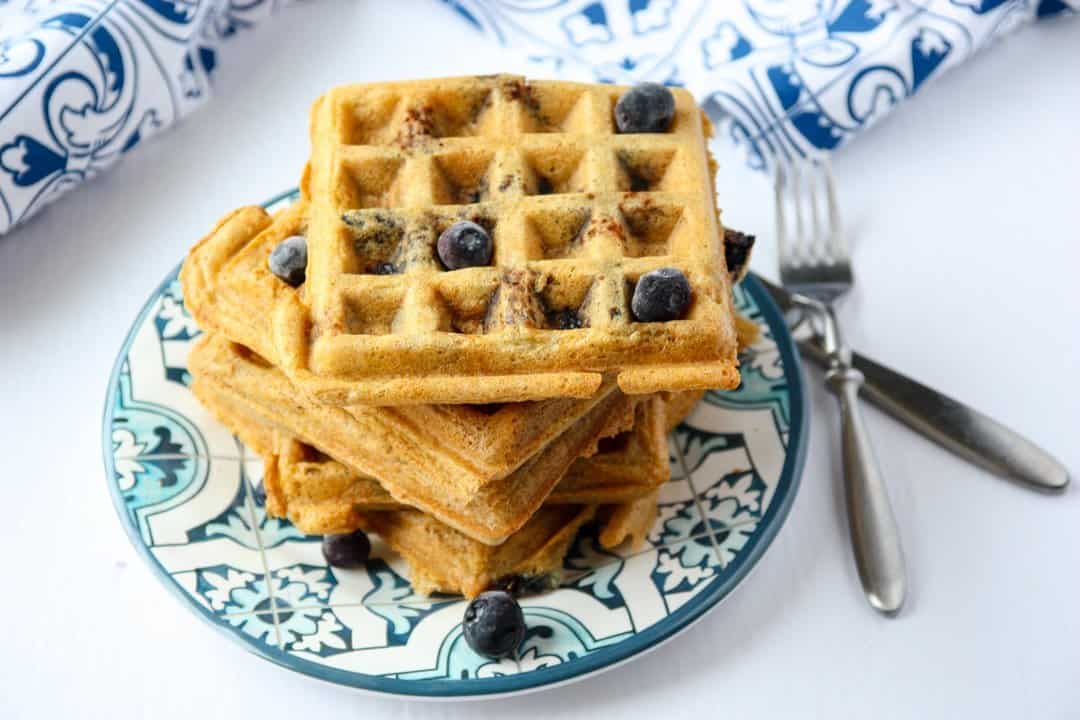 While it’s a treat to enjoy waffles for breakfast on a weekend, who has time on a busy weekday morning? The solution: make extra waffles and freeze them. Then just take out as many as you need, pop them in the toaster, and off you go. If you have a toaster at your workplace, take them along for a desk breakfast. Your co-workers will look at you jealously while they eat their cereal. 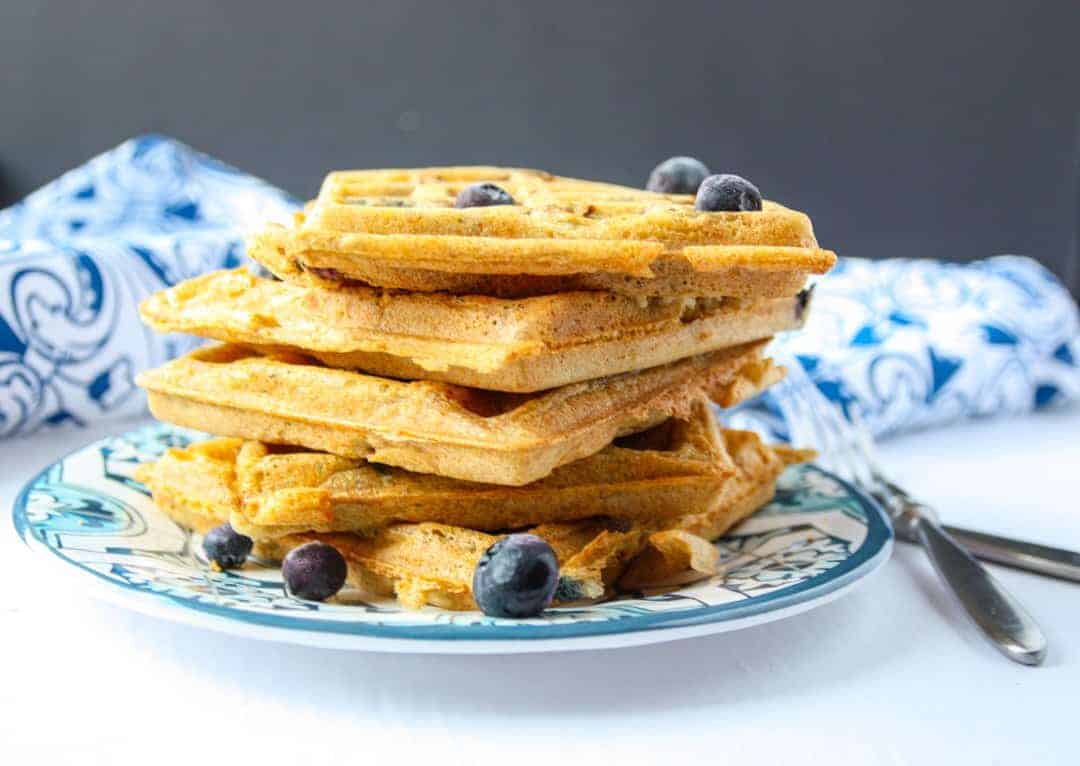 More Eggs In Your Waffles For More Protein

Coconut flour is a very dry flour, so this blueberry coconut waffle recipe has a lot of eggs. Which means extra protein. I like that because usually, waffles and pancakes are a carb-loaded breakfast that will leave you hungry in a couple of hours. Protein at breakfast will keep you full and satisfied for much longer. I also used coconut flour in this moist and delicious Coconut Banana Bread, and these Coconut Shrimp Tacos, so check out those recipes if you are looking for more ways to use it. 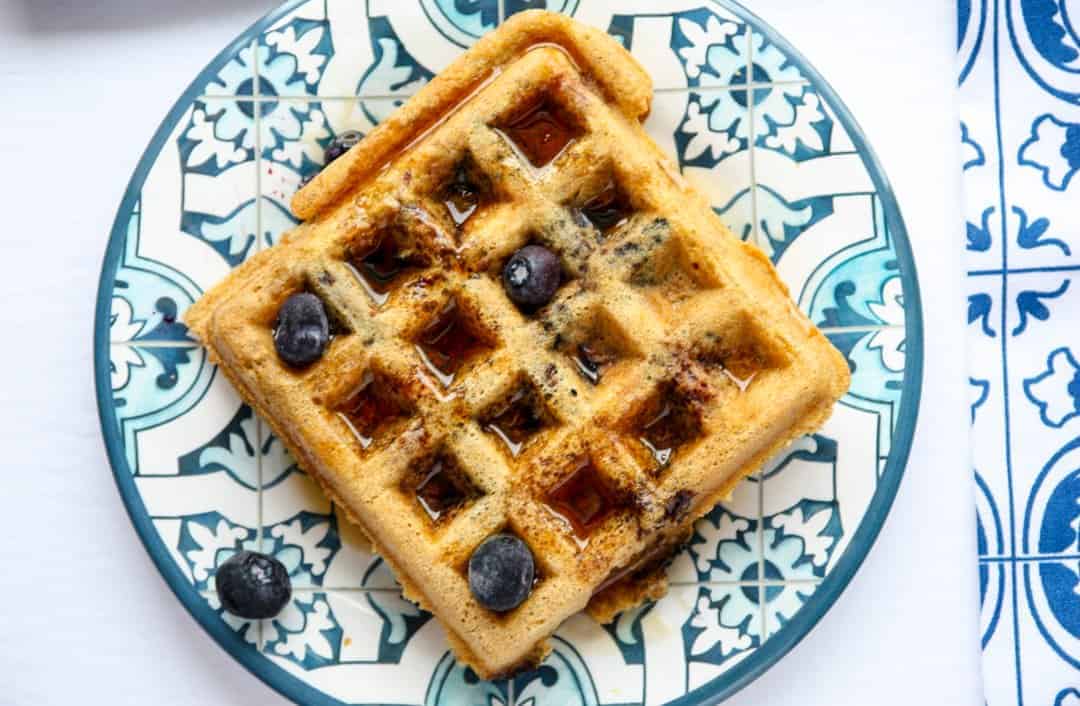 I used frozen blueberries for these waffles, but fresh ones work well too, and you can use any berries that you like. Strawberries, raspberries, or blackberries would all be equally delicious. Maple syrup is my choice for topping, but you can top them with whatever you like. They’re even great with peanut butter (extra protein score). 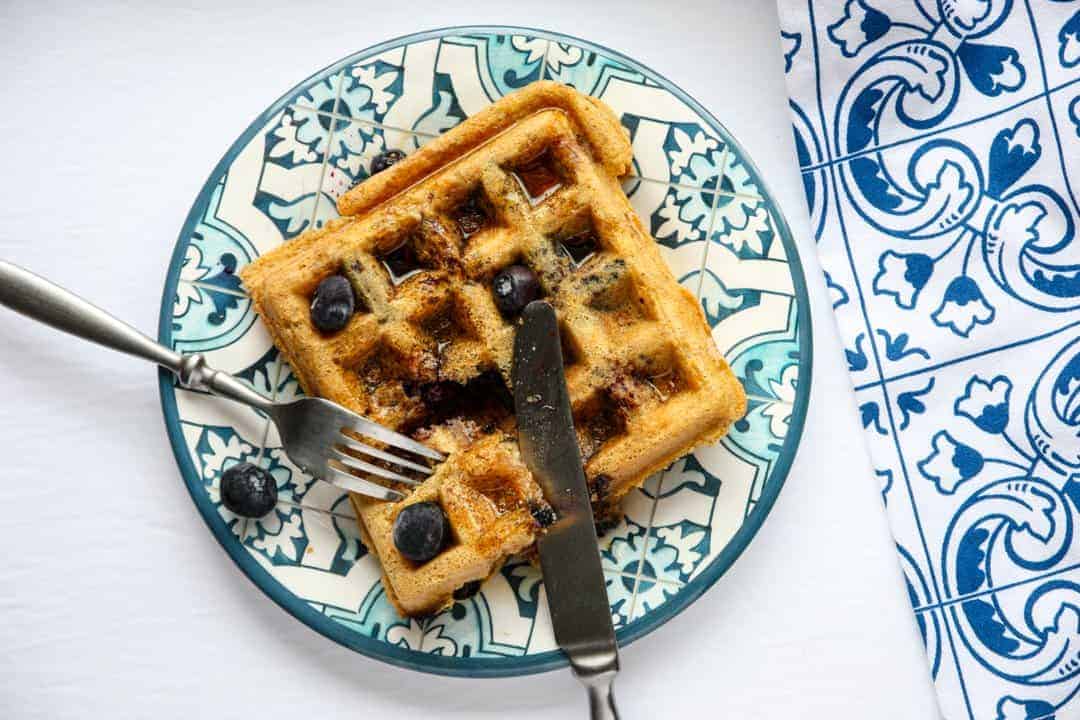 Separating and beating egg whites, then folding into the batter is a waffle secret than results in fluffy, tender waffles. It’s a small extra step, but I notice the difference if I don’t do it. Here’s the science behind it, if you’re interested; How To Make Extra Fluffy Waffles 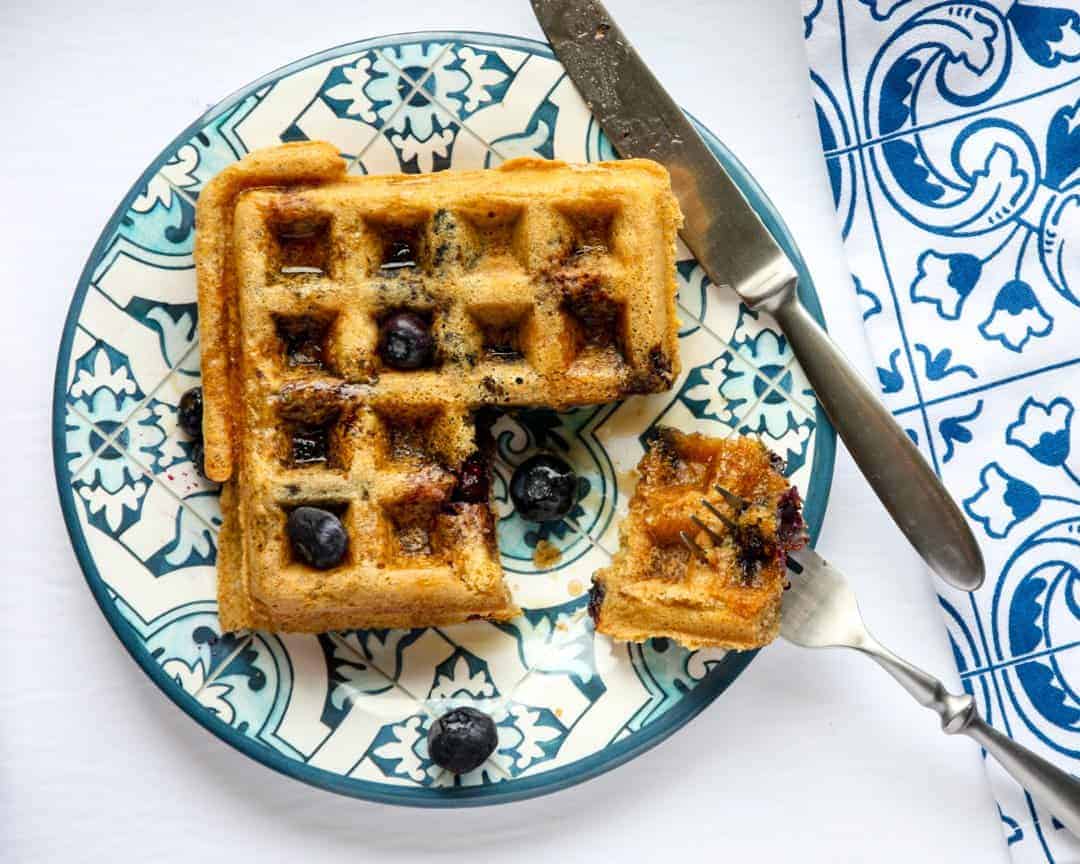 While most waffle recipes contain sugar, I prefer to leave it out. In this recipe, blueberries add just the right amount of sweetness on their own, and maple syrup will sweeten them up even more. Unsweetened waffles are more versatile because they can be sweet or savory after they are cooked. 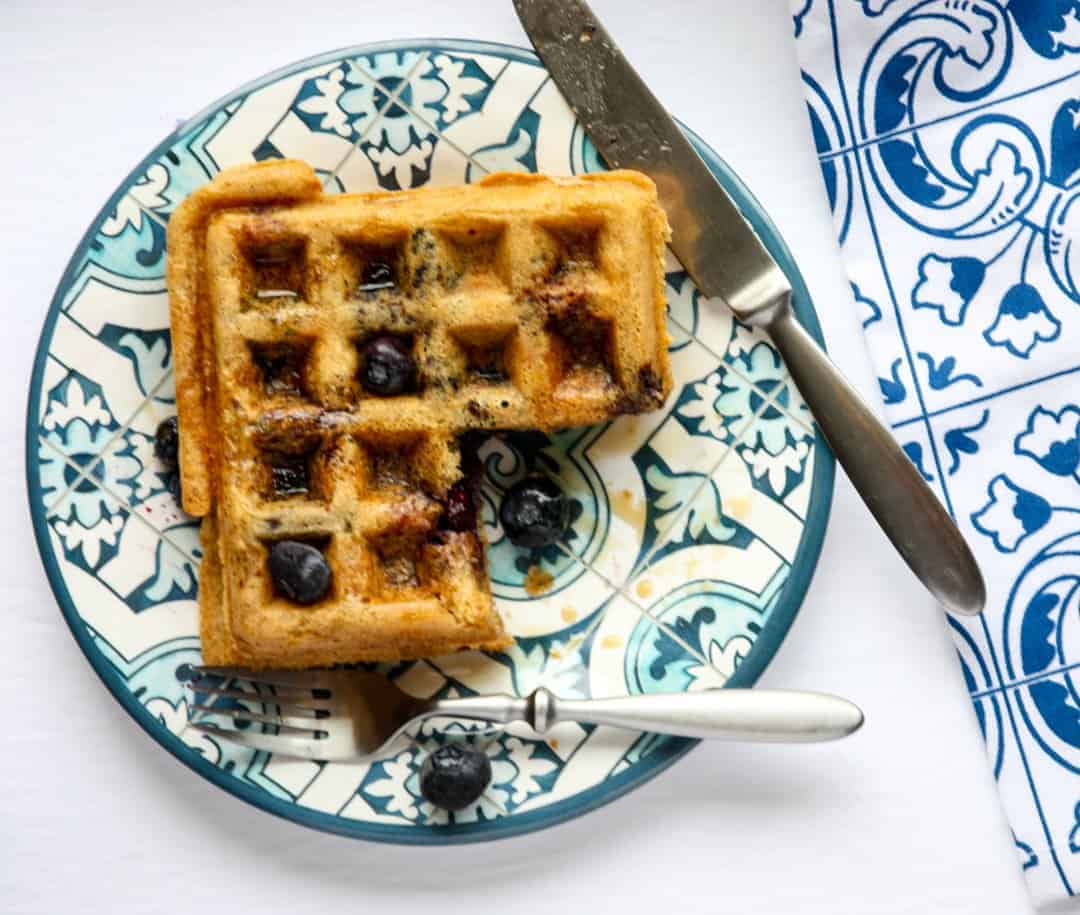 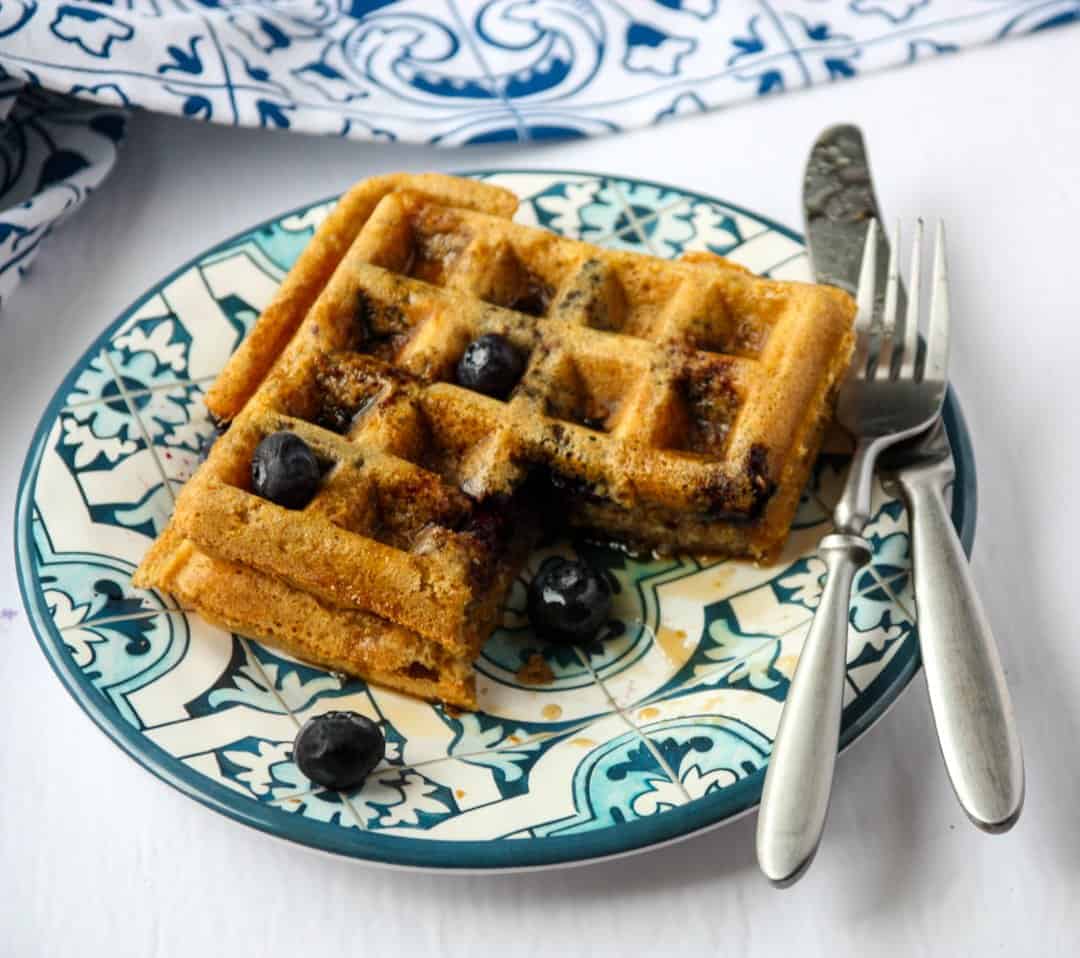 Waffle irons vary. I use the hottest setting, and it takes about 5 minutes for each batch of waffles, but yours may be different, so choose heat settings and times according to your own.