Buckwheat Soup is a great way to use leftover turkey, or chicken. It’s also a soup worth making with fresh turkey or chicken, too. This turkey & buckwheat soup will make you fall in love with buckwheat, if you haven’t already. 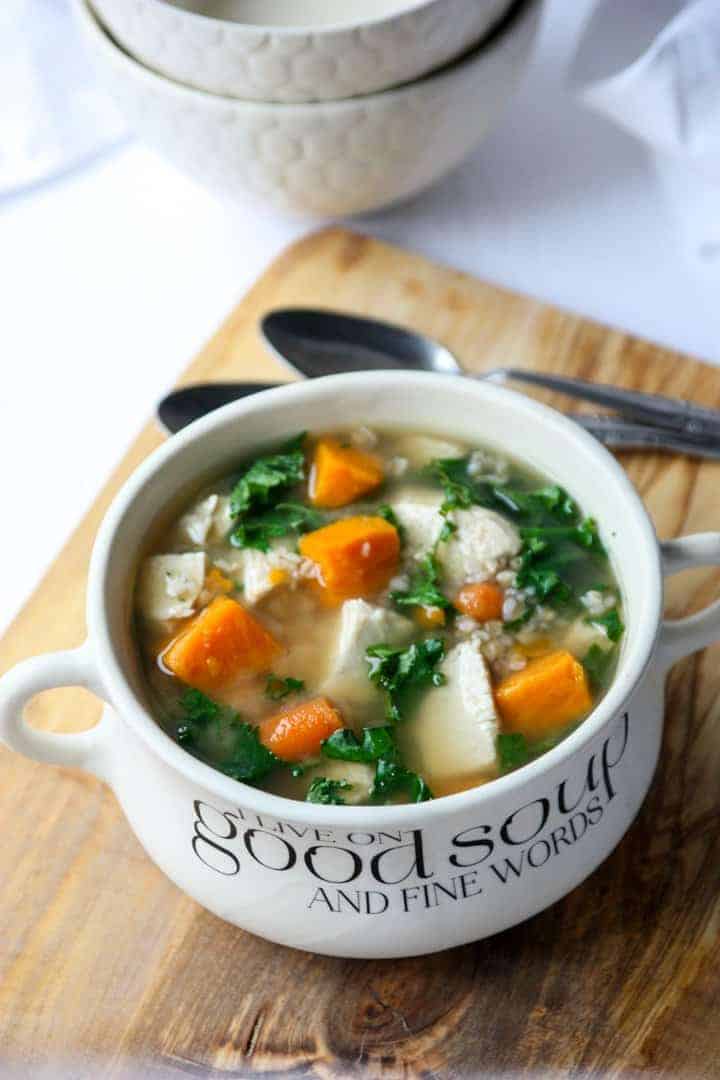 About This Buckwheat Soup with Turkey

This delicious soup came about after a holiday feast when I wanted to try something different than the standard turkey noodle or rice soup that I usually make with leftovers. In addition, I wanted a grain-free and gluten-free soup so that everyone could enjoy it.

I used homemade stock which I made from the turkey bones. If you don’t have homemade, it will still be good with a commercial stock or broth. I also added cubed sweet potatoes and kale for a healthy, nourishing bowl of goodness. 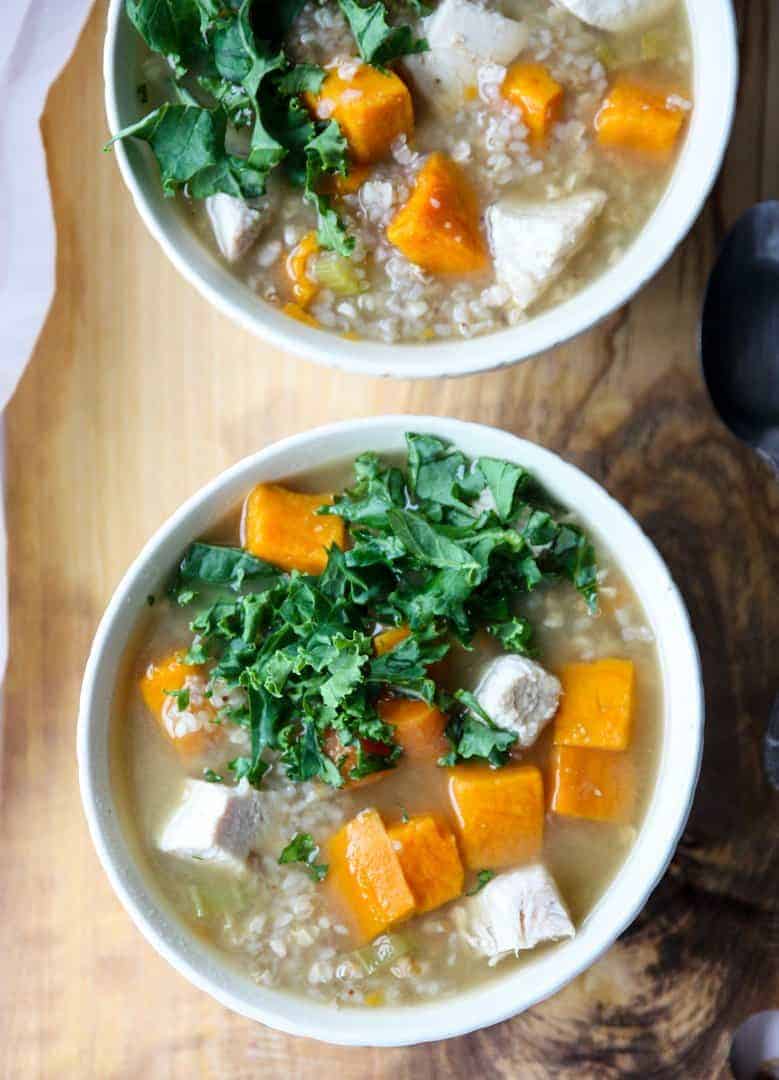 The groats are classified as a pseudocereal because they are treated like a grain in the same ways as barley, bulgur, farro, and rice, to name just a few. Get complete buckwheat information: Whole Grains Council 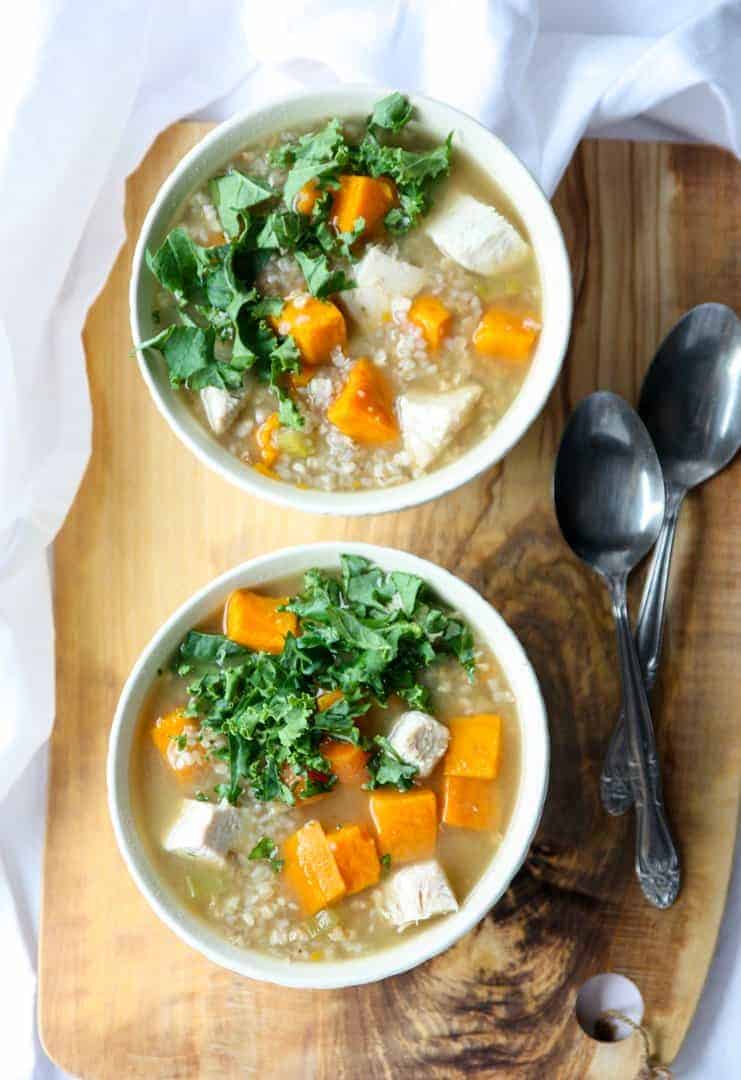 Because buckwheat is not a grain, it is gluten-free. Which makes it a fantastic ingredient if you can’t, or don’t eat wheat or other grains. When cooked, buckwheat has a texture similar to cooked rice, so it’s a perfect substitution for rice or noodles in this buckwheat soup, and in many other recipes. And I also love using buckwheat in hearty salads, like this delicious Butternut Buckwheat Salad, or my popular Mediterranean Buckwheat Salad.

However, do check the packaging to be sure that your groats are processed in a gluten-free facility if you are sensitive. 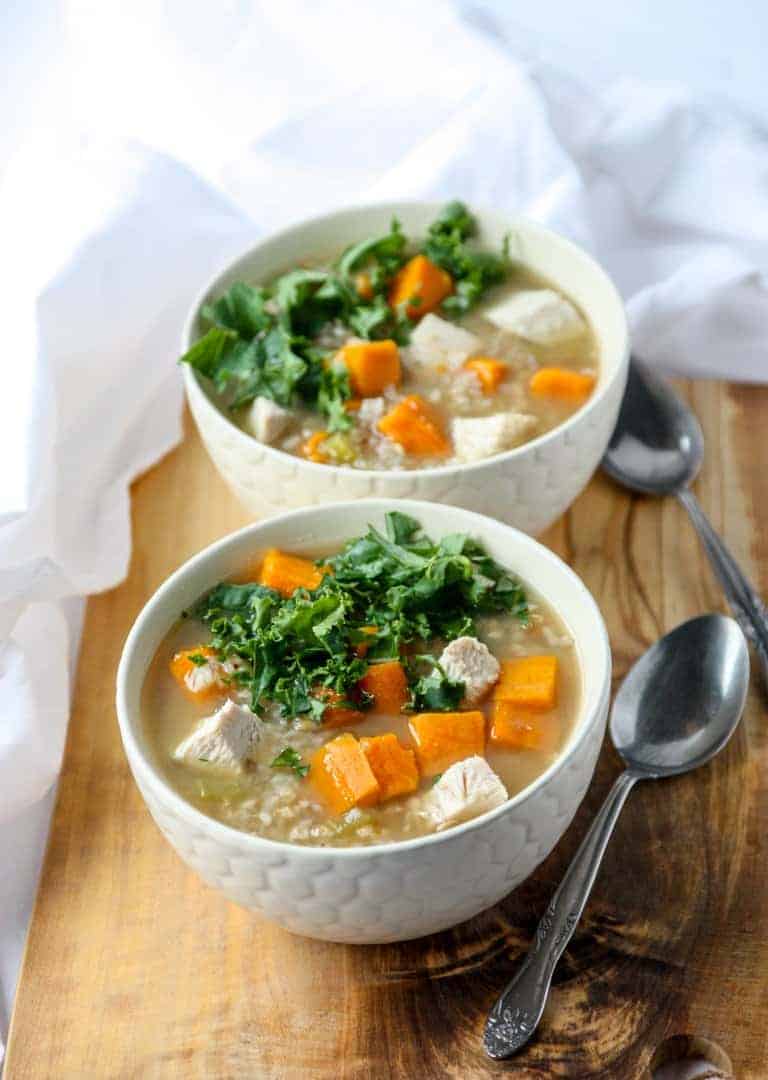 Why Buckwheat is a Nutritional Super Star

First, buckwheat groats are an excellent source of plant-based protein, containing all of the essential amino acids that our bodies need. Secondly, that high protein content combines with being high in soluble fiber as well. This means that buckwheat has a low glycemic index, keeping you full for longer, and it will not cause blood sugar to spike. Third, buckwheat groats are a good source of pre-biotics, essential for gut health, and many other health benefits. Finally, these groats are loaded with antioxidants, vitamins (especially B vitamins), and minerals. 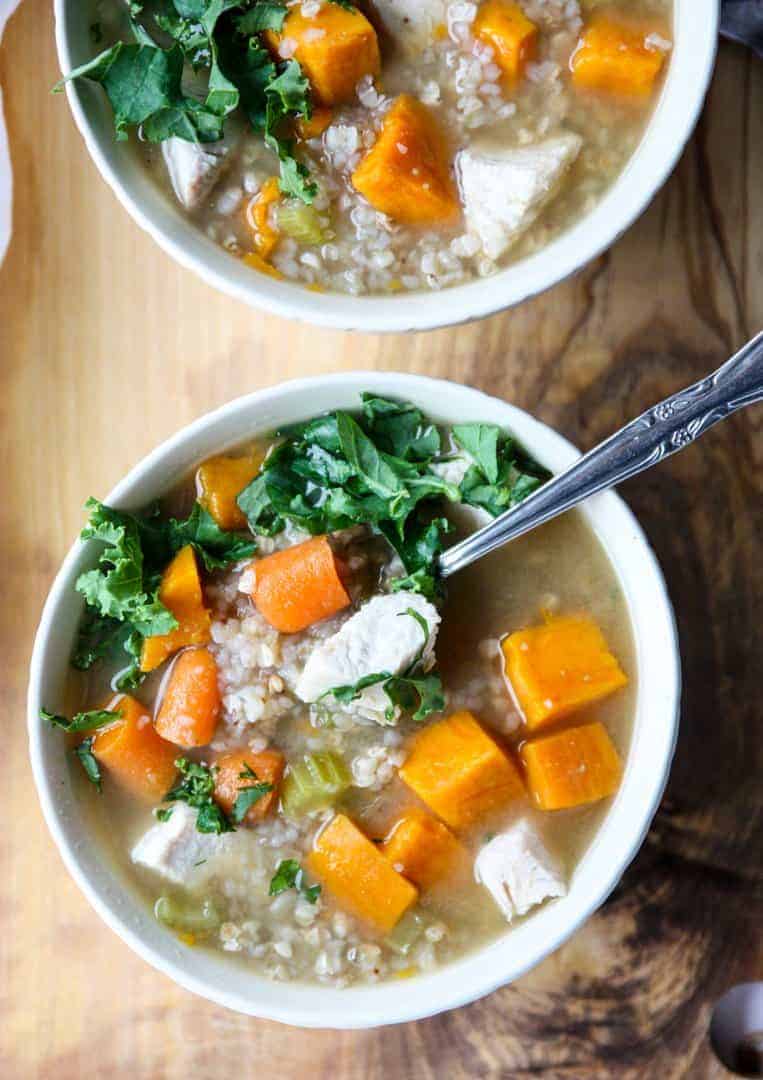 Although buckwheat groats, like rice, have a fairly mild flavour, they are not starchy and have a slightly nutty flavour. Toasting the buckwheat groats also gives them a toasty taste, which I think is delicious. I used kasha, or toasted groats for this buckwheat soup. 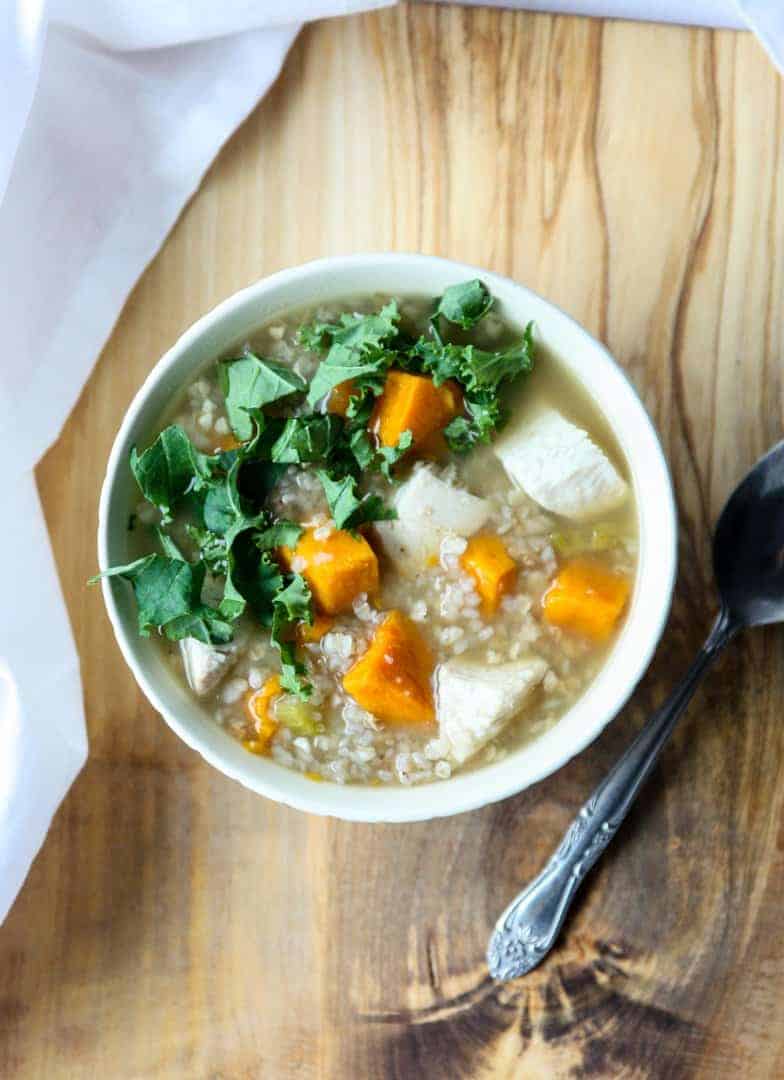 Where to Buy Buckwheat

Most grocery stores carry buckwheat groats, and you can usually find them stocked with grains and cereals, or in the gluten-free section, if your store has one. If not, you can always find them on Amazon. (link in the ingredient list). 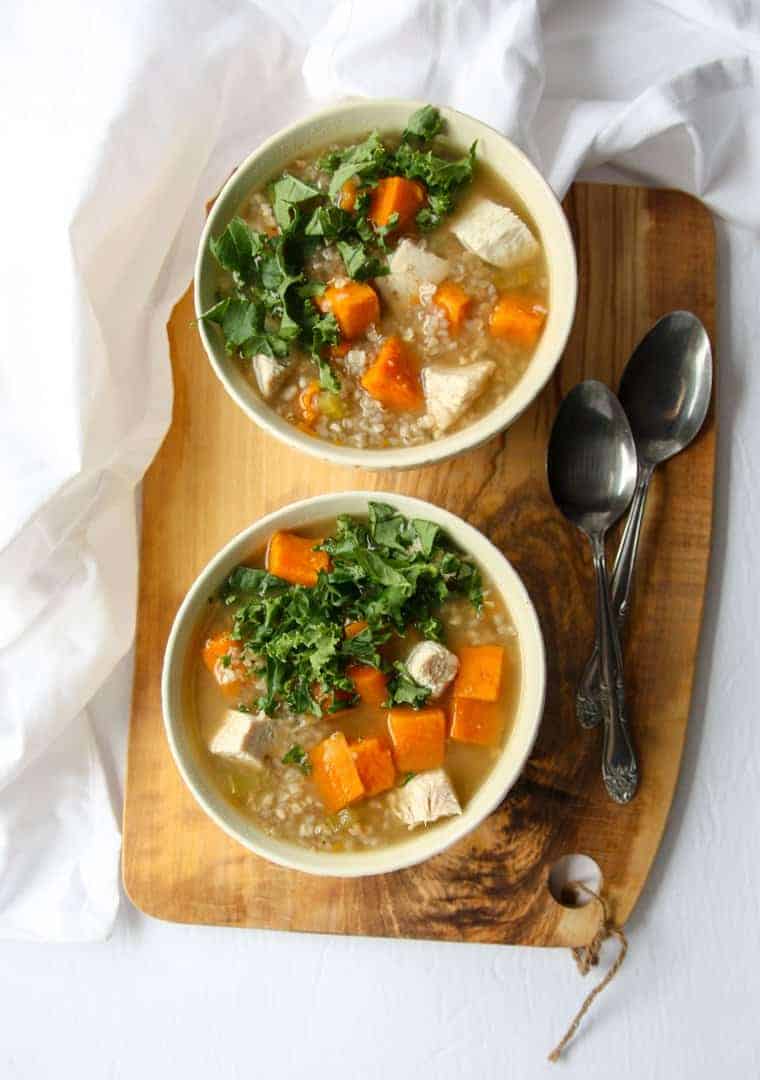 How to Store Buckwheat

Store your buckwheat groats in an airtight container, in a dark place at room temperature and use them within two months. 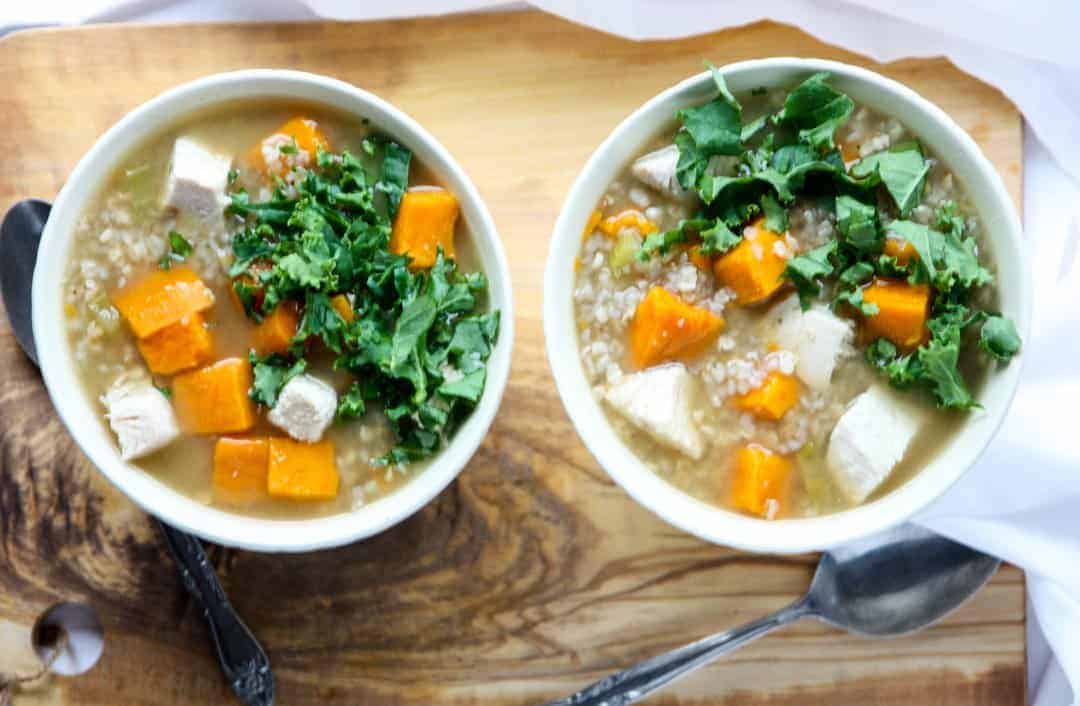 If you will have leftovers of this soup, cook the buckwheat separately, adding to the soup before serving. (Like rice or pasta, the groats will absorb all of the liquid if allowed to sit). To make this buckwheat soup with fresh turkey or chicken, add cubed raw turkey or chicken when the stock is added to the pot. If you can't find kasha, or toasted buckwheat, you can toast the raw buckwheat groats yourself in a pan over low heat for about 10 minutes, shaking the pan often. The groats are toasted when they turn golden brown. 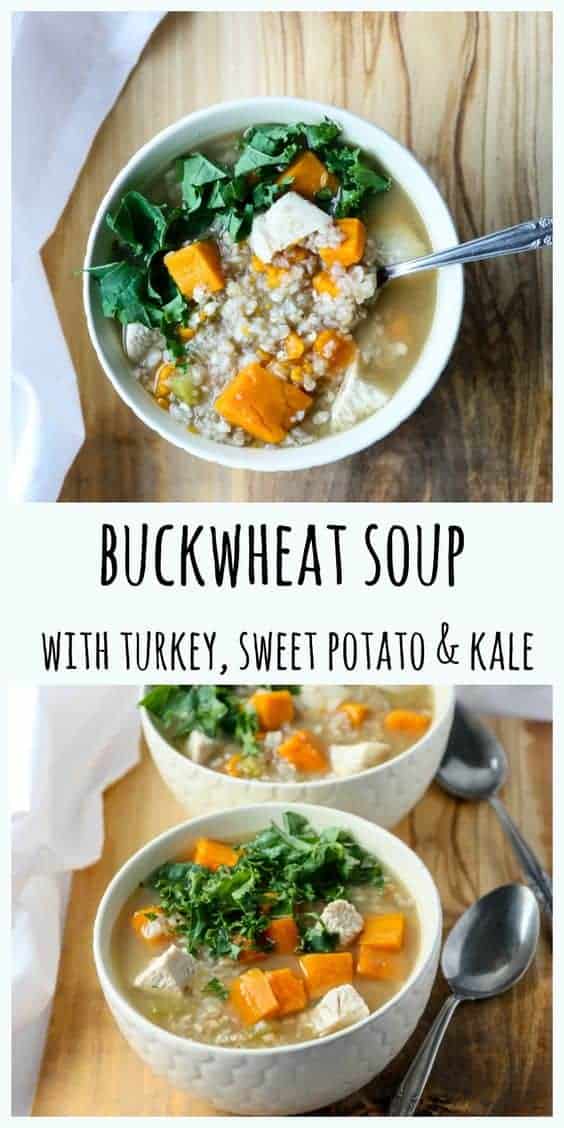