With Valentine's Day coming up next week, this Marry Me Chicken Recipe seemed like a perfect one to feature. 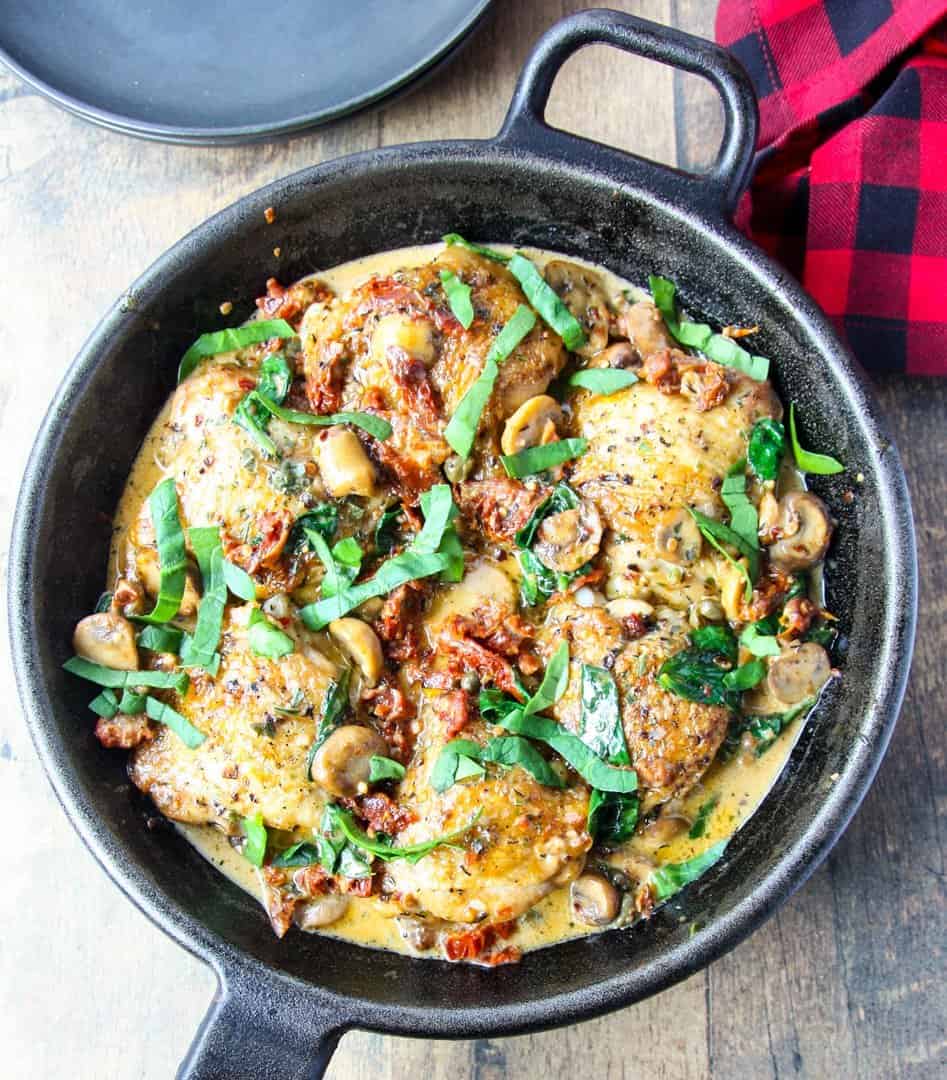 What is Marry Me Chicken?

Marry Me Chicken is a name coined for this Sicilian chicken dish a few years ago by delish.com because this flavourful skillet chicken is so crazy delicious that it could potentially trigger marriage proposals. (Or maybe because the dish is so good that you want to marry it?)

The recipe was an instant hit and has been wildly popular ever since. 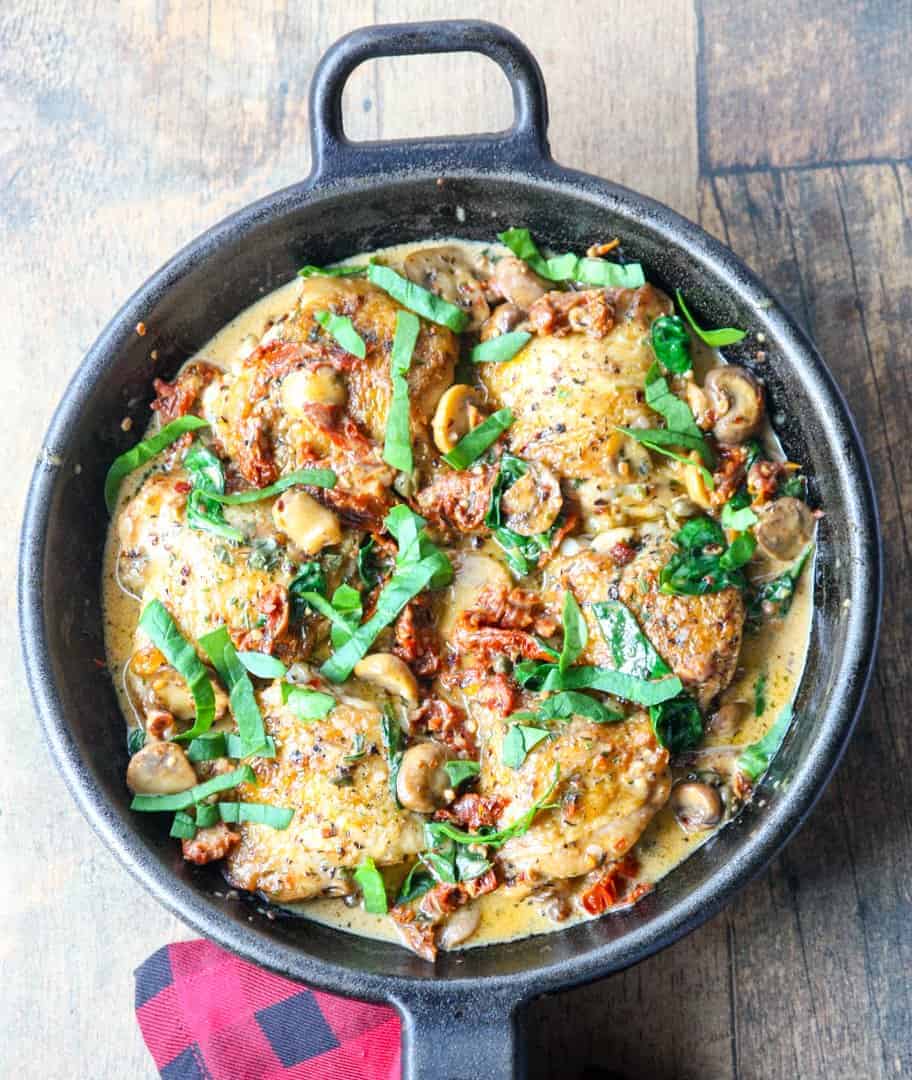 What Makes This Chicken Recipe So Good?

Maybe it's the juicy, crispy-skinned chicken thighs smothered in a rich creamy sauce. And maybe its the simple perfection of sun-dried tomatoes, garlic, Parmesan, red pepper flakes, thyme, and basil. Whatever the reason, this marry me chicken recipe lives up to its name. 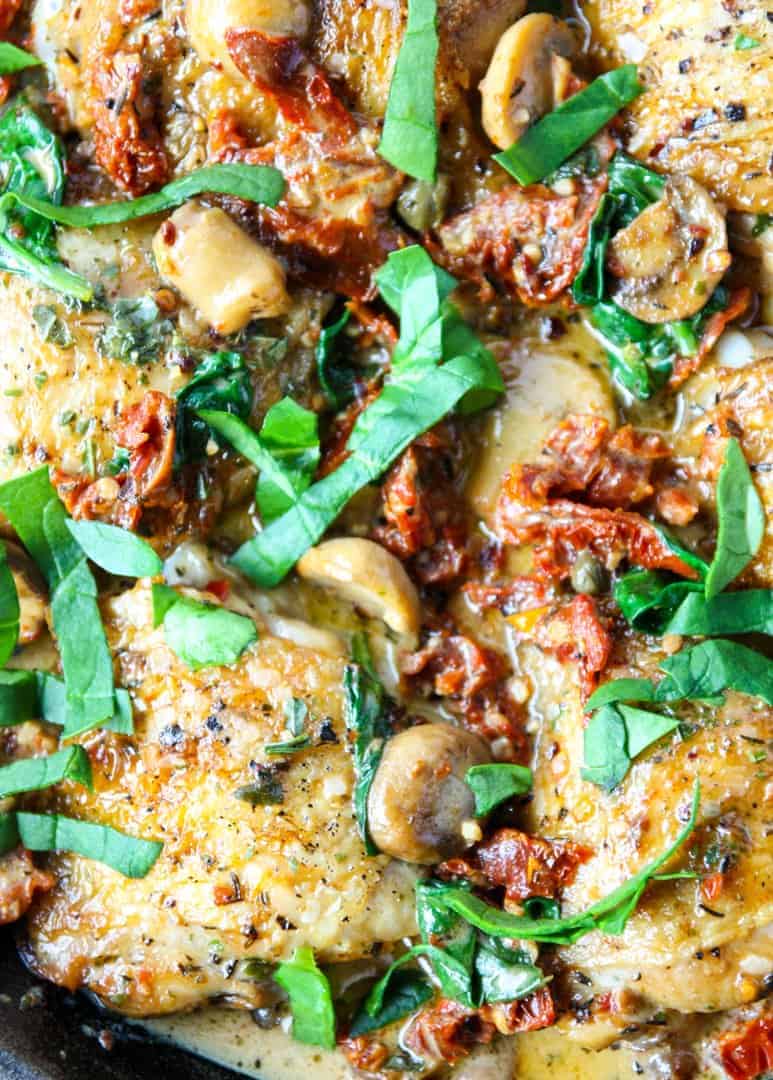 What's The Difference Between Marry Me Chicken, and "Engagement" Chicken?

Engagement chicken is the name given, back in the '80s by Glamour Magazine to a whole roast chicken with lemon and herbs. Apparently, several Glamour staffers were proposed to after making it for their dates. Glamour published the recipe in the magazine under the name, engagement chicken.

Engagement chicken is really just a simple roast chicken. Marry Me Chicken is a bit more complex, but still a very simple recipe. It seems that a good, simple chicken dish is an inspiration for romance. 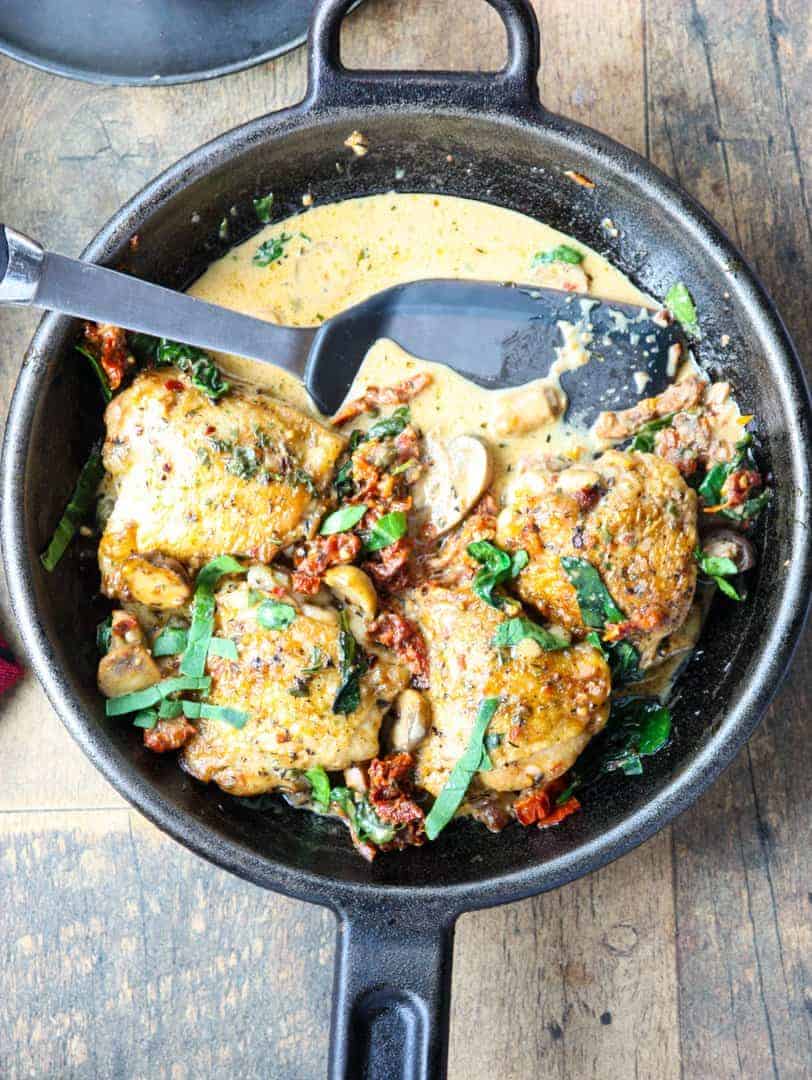 What You Need To Make This Recipe

This recipe uses bone-in, skin-on chicken thighs. Chicken thighs stay juicy and tender, and the crispy skin is, I think, a big part of the appeal of this dish. However, you can certainly use chicken breasts instead, or boneless, skinless thighs, breasts, or a combination and you will still have a delicious meal.

Because this is an Italian recipe, I'm using olive oil to oil the skillet. However, don't waste your good extra virgin olive oil for this purpose. It will bet lost in the recipe, and it has a very low smoke point, making it unsuitable for frying and searing. If you don't have olive oil, you can use any cooking oil

I used cremini button mushrooms for this recipe, but any mushrooms will work! if you have porcini mushrooms, all the better.

If you are using store-bought chicken stock (or broth), try to find a no or low sodium version. You will be salting the chicken, and the cheese and capers add saltiness as well.

Heavy Cream is essentially, whipping cream, with a fat content of around 35%. Although you could use half and half, which has a lower fat content of around 10-18%, your dish may not be quite as thick and creamy. For a non-dairy alternative, you can use coconut milk, but be aware that the recipe will have a definite coconut flavour.

Capers add a bright punch to this creamy dish, but if you don't have them try pitted green olives, quartered.

Nothing but the real thing will do for this special dish. It is, after all, called Marry Me Chicken, is it not? So pull out all the stops and use either freshly grated Parmigiano Reggiano, or Grana Padano. 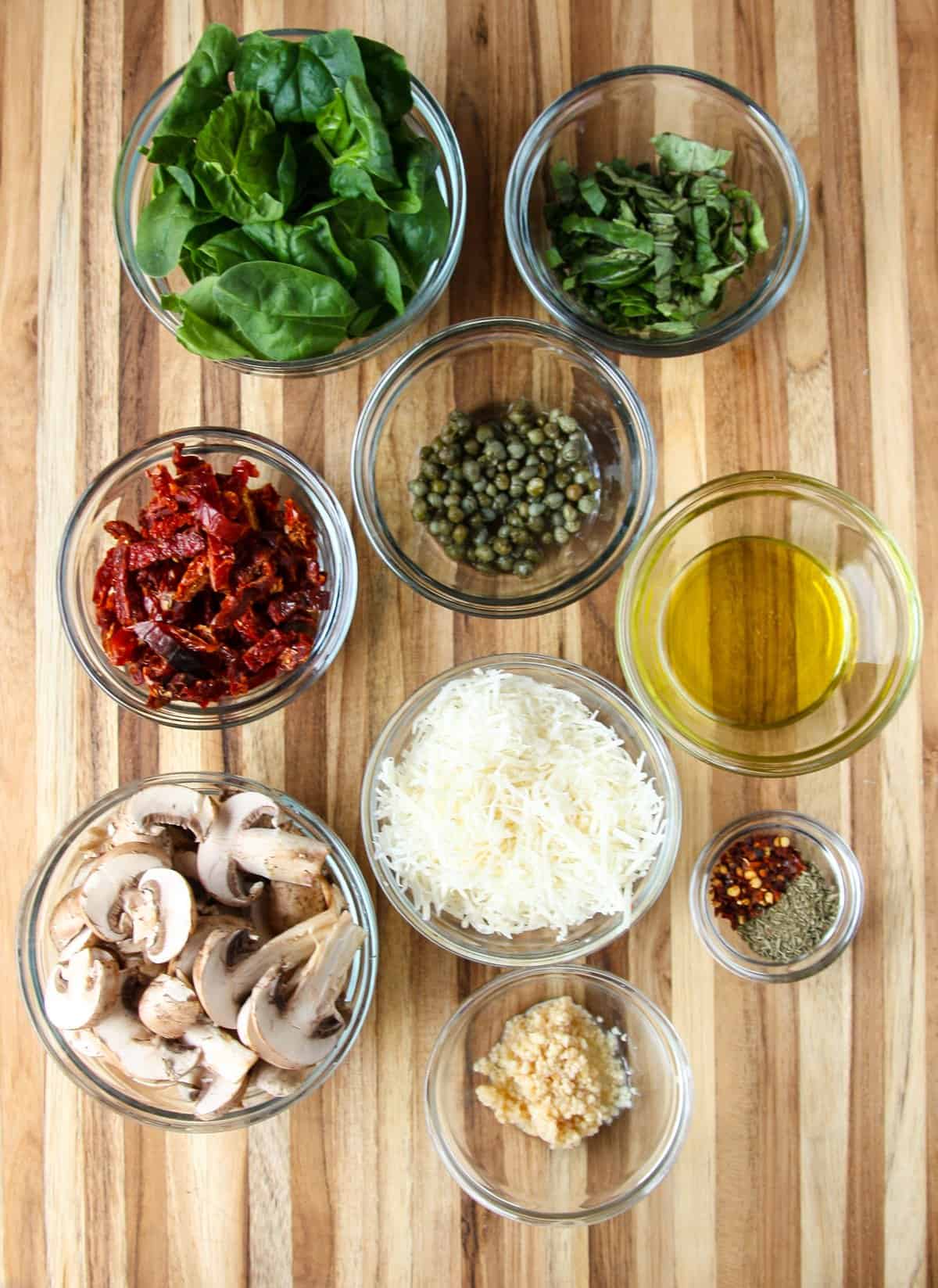 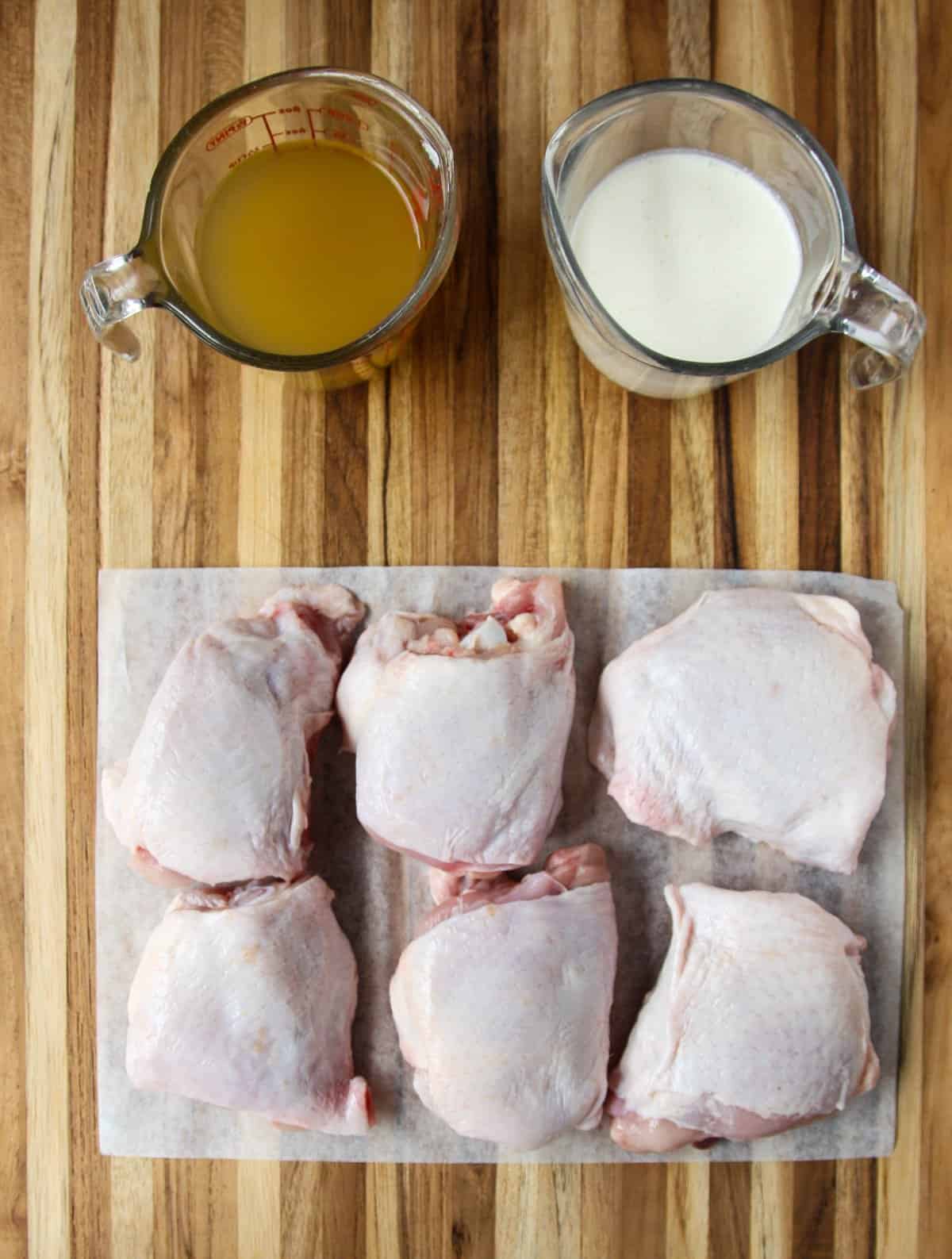 In spite of the cute name for this recipe, it is really just a Sicilian skillet chicken. I have added mushrooms, capers, and spinach to my version. Olives, grape tomatoes, artichoke hearts, roasted red peppers, feta cheese are also good additions.

What To Serve With This Recipe

You could serve Marry Me Chicken with pasta or rice (especially wild rice) to soak up the delicious sauce, or you can serve it on its own, with just a side vegetable, like these tender-crisp green beans that I used. Steamed asparagus, roasted cauliflower, steamed julienned carrots or steamed broccoli, are all good choices, too.

You'll make this meal even more romantic if you start with a simple appetizer like these  Bacon Wrapped Dates, or  Grilled Sesame Shishito Peppers along with a bubbly cocktail like this Prosecco Margarita Cocktail. And of course, a delectable dessert to finish it off. If you like chocolate, a couple of our favourites are Raspberry Chocolate Mousse or Chocolate Berry Cups, but equally romantic dessert options are Strawberry Dutch Baby Strawberry Mousse Recipe with Vanilla Layer or Coconut Mousse. 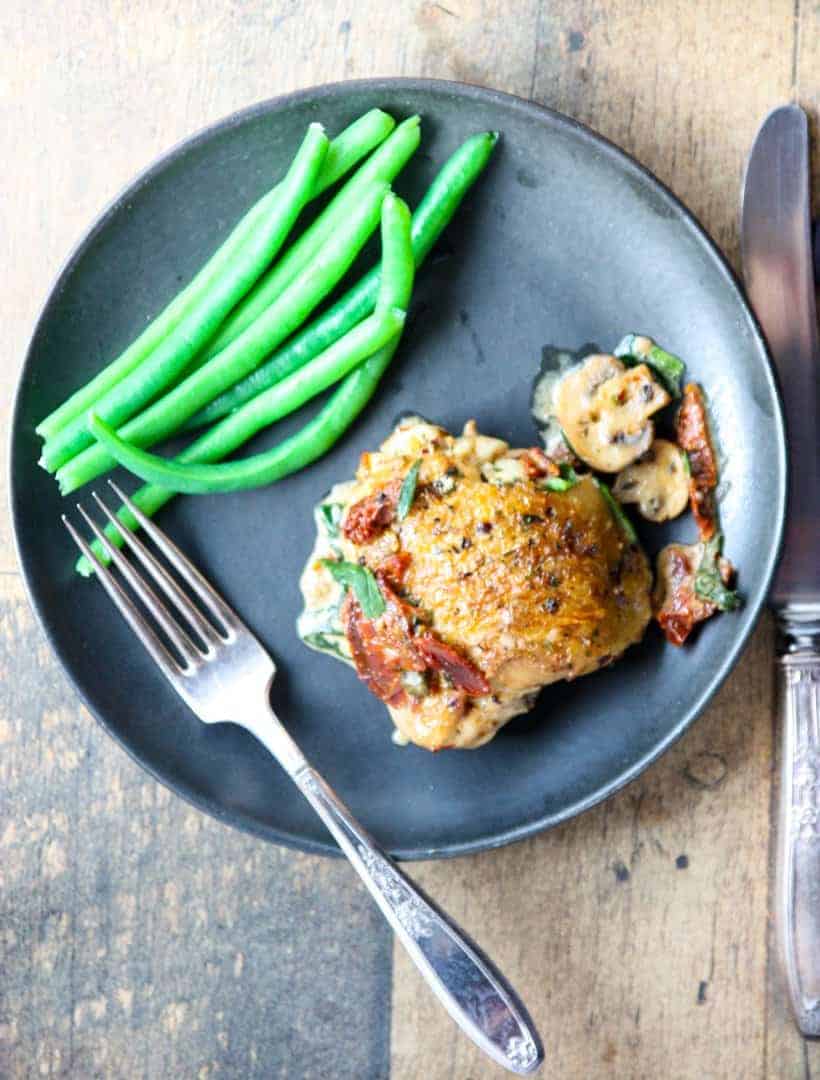 Can I Make This Marry Me Chicken Recipe Ahead?

Yes, you can make the dish ahead of time, earlier in the day. Allow it to cool, then cover the skillet with foil, and keep it in the fridge until it's time to eat. Re-heat it on the stovetop over medium heat, until the sauce is bubbling, then place the skillet under the broiler for 5 minutes to ensure the skin is crisp.

Alternatively, you can cover the skillet with foil and keep it in a low (170-200°) oven for up to an hour, until serving time. 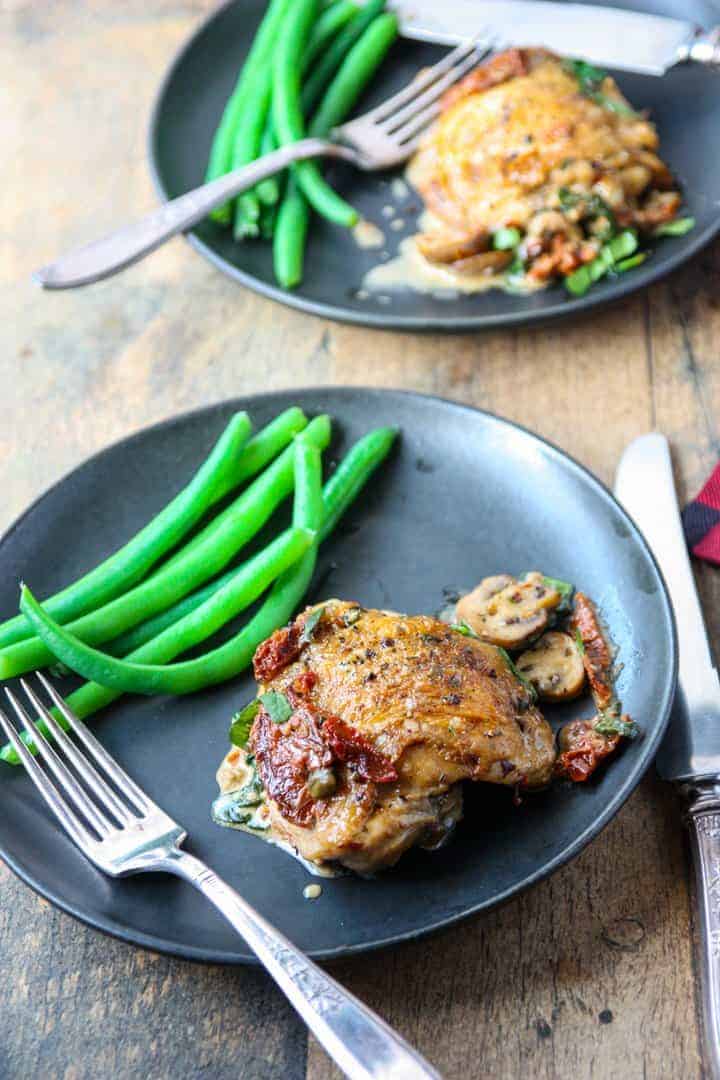 When searing chicken pieces, leave enough space around each piece so that they will brown instead of steam. If your skillet isn't large enough, brown in 2 batches.  The secret to a good sear is to flip only once. It might be tempting to keep checking, but if you leave the chicken for the full four minutes on each side, you will get a beautiful golden sear that doesn't stick, as well a crispy skin. If you are making this dish ahead of time, as per the post instructions, don't add the spinach until it's time to reheat.